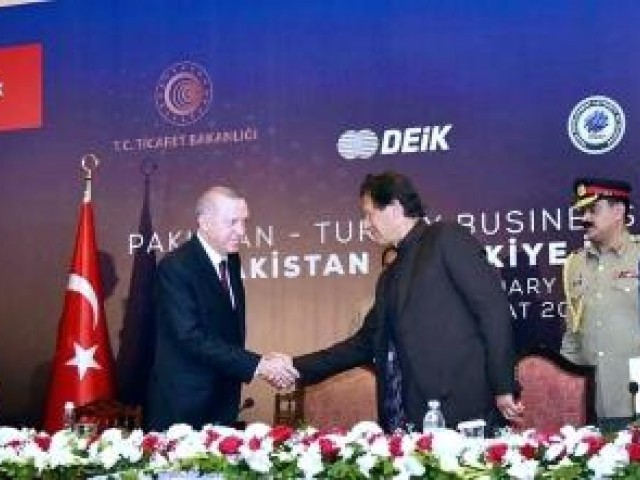 ISLAMABAD.: Pakistan and Turkey on Friday signed over a dozen pacts, particularly the declaration of the Strategic Economic Framework, which is aimed at increasing the bilateral trade volume between the two countries from the existing $800 million to $1 billion in the short-term and eventually the target of $5 billion two sides had agreed on earlier.

The two countries will hold further negotiations to finalise a Free Trade Agreement (FTA) in April.

The documents, including agreements, protocols and memorandums of understanding (MoUs), to boost existing bilateral ties in the fields of trade, energy, tourism, defence and infrastructure development were signed at a ceremony held at the PM House in the presence of Prime Minister Imran Khan and Turkish President Recep Tayyip Erdogan.

The ceremony was held after a one-on-one meeting between PM Imran and President Erdogan followed by the Plenary Session of the 6th round of Pakistan-Turkey High Level Strategic Cooperation Council co-chaired by the two leaders.

The declaration of the Strategic Economic Framework was signed by the Pakistani prime minister and the Turkish president themselves.

“We have to benefit from the experience of Turkey especially in the tourism sector through which it generates $35 billion revenue per year,” PM Imran said while addressing a joint news conference with the Turkish president.

The premier said Pakistan also wanted to benefit from Turkey’s achievements in the construction sector for providing affordable housing.

“We also want to benefit from how it [Turkey] has boosted its economy, checked debts, including the IMF loans, and achieved a turnaround,” he added.

“Giving jobs to the youth is very important for Pakistan and it will also benefit from Turkey’s experience in industrialisation.”

Speaking on the occasion, President Erdogan recalled PM Imran’s visit to Turkey and noted that the two sides had agreed to increase the bilateral trade volume to $5 billion by 2023.

“The Strategic Economic Framework provides a road-map to what the two countries should do for an economic partnership,” he added.

“Turkey is ready to support Pakistan in the areas of transport, energy, tourism, healthcare, education and law enforcement. This will help boost its socio-economic development.”

Earlier speaking at a joint session of Turkey-Pakistan Business Forum, the Turkish president said no one who had invested in Turkey had regretted the decision so far.

“The current trade volume of $804 million between Pakistan and Turkey is not sufficient, he noted, adding that the bilateral trade volume must first increase to 1$ billion and then achieve the target of $5 billion.

He noted that Turkey’s direct investment in was about $500 million.

Speaking at the forum, Adviser to the PM on Commerce Abdul Razak Dawood said work on the Strategic Economic Framework would be completed by March. In April, he added, the two countries would further negotiate on the FTA.

Turkish Trade Minister Ruhsar Pekcan told the participants of the forum that the President Erdogan’s visit to Pakistan would accelerate bilateral investments.

She stressed the importance of Turkish contractors’ participation in Pakistan’s infrastructure and superstructure investments.

“We will utilise the sources of Turk Eximbank and the Asian Infrastructure Investment Bank to finance these projects,” she added.

At the ceremony at the PM House, the two countries signed an MoU to boost cooperation in the energy sector, especially in the areas of hydrocarbons, exploration and production (E&P) joint ventures, sharing natural gas distribution and transmission practices and LPG wholesale market expertise. Energy Omar Ayub and his Turkish counterpart Fatih Donmez inked the document in the presence of PM Imran and President Erdogan.

The Turkish Petroleum International Company and the Pakistan State Oil, which have been nominated for increased cooperation in the hydrocarbon sector in the MoU, will create “supply and trading opportunities for petroleum and petroleum products mainly gasoline, fuel oil, bitumen and other products”.

Lt Gen (Retd) Naweed Zaman, the rector of the National University of Science and Technology of Pakistan, and Tamel Kotli, the CEO of the Turkish Aerospace Industries, signed an MoU for cooperation between their respective institutions.

The Turkish Standard Institutions (TSI) and the Pakistan Standard and Quality Control Authority (PSQCA) signed an MoU for cooperation in the fields of standardisation, conformity assessment, meteorology and training. It was inked by PSQCA Director General Abdul Aleem Memon and TSI President Dr Adem Sahin

To enhance media and cultural cooperation, a cooperation protocol between Turkish Radio Television Corporation (TRT) and Pakistan Television (PTV) was signed by PTV Managing Director Amer Manzoor and TRT DG Ibrahim Eren. Similarly, another such protocol was also signed by Pakistan Broadcasting Corporation DG Samina Waqar and the TRT DG to enhance cooperation and share expertise in the field of radio,

Pakistan and Turkey signed an agreement to strengthen cooperation for development of tourism. The signatories were Inter-Provincial Coordination Minister Dr Fahmida Mirza and Turkish Deputy Minister for Culture and Tourism Dr Serdar CAM.

Science and Technology Minister Fawad Chaudhry and Turkish Trade Minister Ruhsar Pekcan signed an MoU for cooperation in the field of Halal accreditation between the two countries.

Communications Minister Murad Saeed and Turkish Transport and Infrastructure Minister Mehmet Cahit Turan signed an MoU for cooperation between the Pakistan Post and the Turkish Post.

Similarly, another MoU was signed by Railways Minister Sheikh Rashid Ahmed and the Turkish transport and infrastructure minister to increase cooperation in the field of train transportation.

The two sides reiterated their resolve to transform bilateral fraternal relations into an ever-expanding, mutually beneficial, strategic partnership between the two countries.

They also reaffirmed that the time-tested and unparalleled relations between the two countries were embedded in a common historical, religious and cultural heritage.