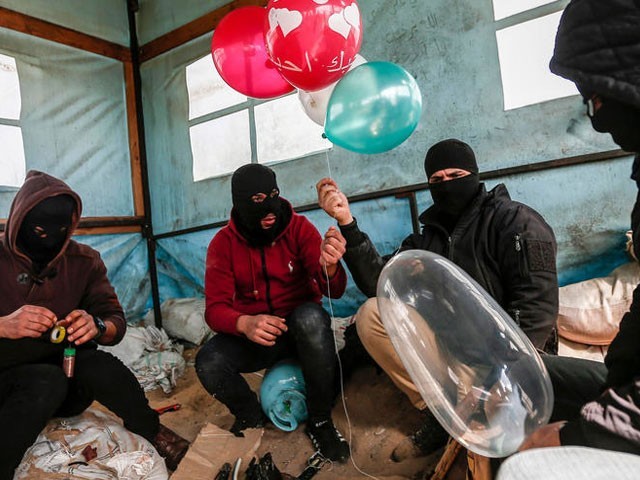 BUREIJ, PALESTINIAN TERRITORIES: As the bunch of brightly-coloured balloons floated into Gaza’s evening sky, there was a piercing crackle of gunfire.

Moments earlier, the balloons had been launched by a group of masked young Palestinian men huddled near the al Bureij refugee camp.

They attached explosives to the weapon before setting it adrift towards Israel.

Israeli troops along the border tried to down the device, but the balloons floated on.

Explosives tied to balloons and kites first emerged as a weapon in Gaza, ruled by the group Hamas, during intense protests in 2018, when the devices drifted across the border daily, causing thousands of fires in Israeli farms and communities.

The Palestinians said at the time they wanted to foster constant fear and misery among Israelis as punishment for the Jewish state’s crippling 13-year blockade of Gaza, which the United Nations has identified as the main cause of grinding poverty in the strip.

Israel blamed Hamas for the balloon attacks, which eventually stopped after the two sides reached secret agreements to slightly ease the blockade in exchange for calm.

The plan triggered outrage among Palestinians, who saw it as a wishlist of Israeli objectives.

As tensions rose, Gazans again directed rocket-fire and mortars towards Israel, which typically struck back with airstrikes targeting Hamas positions in the strip.

And along with traditional weapons, Gazans once again sent incendiary-laden balloons across the border.

“We are not afraid and we will return to (using balloons) despite all the threats to target us,” Abu Hamza, one of the young men preparing the devices, told AFP.

Like many things in Gaza, weaponising balloons is the work of many political factions.

The young men at the al Bureij camp said five major groups were involved in launching balloons, with ideological divisions among them.

Hamas and other parties all have dedicated balloon-launching units, with the smallest being around 180 members.

But Israel holds Hamas responsible for all hostile action emerging from Gaza.

Tensions have eased somewhat since Monday when a delegation from Egypt, a longtime mediator between Hamas and Israel, visited Gaza to negotiate calm.

Yet even as the Egyptian delegation was in town, the men in the tent were inflating balloons and preparing explosives.

Group leader Abu Malek said the incendiary part of the weapon is called the “Yassin,” a 900 grammes (two pounds) device named after Hamas’s founder Sheikh Ahmed Yassin, who was assassinated by Israel in 2004.

He told AFP that Israeli kibbutzes (farming collectives) are a regular target and that the devices can reach as away as Beersheba, roughly 50 kilometres (31 kilometres) from Gaza.

“We’re launching this missile to cause casualties among soldiers and in homes,” he said.

Israel has at times tried to target the balloon assembly teams with airstrikes or tanks, but that is difficult due to the fast-moving nature of the groups and the potential costs were Israeli forces to enter Gaza.

In December, Israel unveiled a prototype of a laser called the “Light Blade,” which could prove effective against balloons, but it is not clear when the technology will be ready to deploy.

Hamas official Khalil al-Hayya told journalists that there was no official decision to restart the balloon attacks following the fragile truce.

Young people decided “independently to return to launching balloons to pressure the (Israeli) occupation to end its blockade,” he said.

Abu Hamza of the Descendants of Salah al Din militant group told AFP his faction independently chose to resume attacks a month ago.

But he said he expected the balloons would once again be stopped if Egypt brokered a durable calm.

Meanwhile, they keep flying. On Thursday afternoon, Israeli media reported that several bunches of balloons had floated into the Israeli town of Sderot, landing near a school and sending panicked residents fleeing to bomb shelters.

Abu Hamza confirmed his group would take instructions from the military and political leaders.

“If a decision to stop them comes, we stop them,” he said.