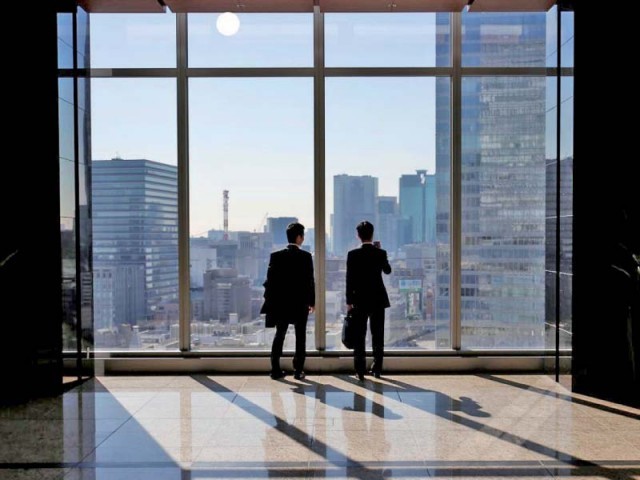 Businessmen have repeatedly insisted that the government should cut the high interest rate if it wants to see the revival of business and economic turnaround in the country. PHOTO: FILE

KARACHI: Apparently most of the industries and businesses have little faith in the government’s tall claims of improvement in the national economy as they keep avoiding new investment projects in anticipation of a visible positive change in the country.

Businesses operating in the private sector borrowed only Rs175.23 billion in first seven months (Jul-Jan) of the current fiscal year, which was 68.25% down compared to Rs552.01 billion borrowed in the same period of previous fiscal year, the State Bank of Pakistan (SBP) reported on Thursday.

Fresh borrowing by businesses was mostly meant for running their day-to-day operations under a tough economic environment. “When we interacted with businessmen, they said it was not feasible to do business at such a high interest rate,” he said.

The central bank has maintained the benchmark interest rate at an eight-year high at 13.25% since July 2019.

People who had funds were investing in government debt securities – treasury bills – to get a handsome return of around 13-14% per annum instead of investing in new long-term projects at a time of sharp economic slowdown, which was the result of government’s economic policies meant for fixing the faltering economy, Hashmi added.

The government, on the other hand, has been making tall claims that the economy is improving.

Pakistan jumped 28 places in the Ease of Doing Business Index of the World Bank in 2019. The current account deficit narrowed 75% in first six months of FY20, foreign currency reserves stood at a two-year high at $12.43 billion and rupee-dollar parity remained stable-to-positive since July 2019.

Businessmen and industrialists, however, did not endorse the government’s claims. Rather, they have repeatedly insisted that the government should cut the high interest rate if it wants to see the revival of businesses and economic turnaround in the country.

The businessmen reiterated the demand for a cut in the interest rate in a meeting with Prime Minister Imran Khan in Karachi a couple of weeks ago, which came a day before the central bank kept the benchmark interest rate unchanged for the next two months.

“The economic slowdown is the result of the prevailing high cost of borrowing, which keeps investment low in businesses. Besides, the high interest rate is a cause of high inflation contrary to the belief that it will contain inflation in the country,” he said. Earlier in January, the central bank said the country was most likely to miss the economic growth target of 3.5% in the current fiscal year.

“It is mostly likely to fall further in the range of 2.5-3% in the current fiscal year,” the analyst said.

The economic growth fell to a nine-year low of 3.3% in FY19. Economist Shahid Hasan Siddiqui said the other day the government should have adopted the strategy of increasing exports rather than decreasing imports to fix the faltering economy.

“Had the government invested (workers’) remittances in different sectors of the economy like export-oriented ones (eg textile and others), the economic growth would have been hovering around 8%,” he said.