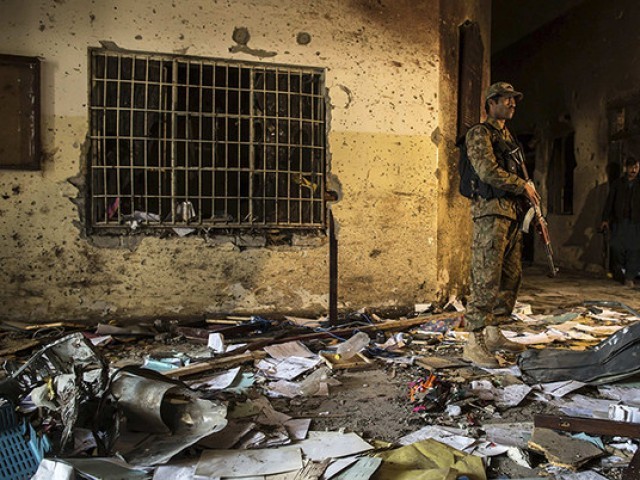 An army soldier stands inside the Army Public School, which was attacked by Taliban gunmen, in Peshawar. PHOTO: REUTERS

“We, the families of Shahuda-e-APS, are under severe shock and completely traumatised after hearing of the news of release/ fleeing of the known terrorist and spokesperson of Tehreek-e-Taliban Pakistan (TTP) from the custody of army along with his family after spending about three years with them,” reads the application.

The letter highlighted that the “cruel terrorist” had already confessed to the attack that killed 147 students.

The families stressed on seven points, seeking answers and relief.

“We have a lot of questions and doubts in our mind which need to be addressed so as to console the agonised mothers who lost their loved ones and [are]  now leading a completely shattered life.”

Recalling Ehsanullah’s surrender, the families asked: “What kind of agreement was made with the terrorist to keep him alive for three years despite his confessional statement for being involved in killing many students and staff of APS.”

The families questioned how the terrorist fled from the “well-guarded custody” or if he was conditionally released.  “Why [was] he not tried in the court of law during these three years,” the application asked.

The families held Ehsanullah accountable as a spokesperson for the banned outfit and added that he was responsible for being a planner, financer and executor of the attack.

Sources told The Express Tribune that the spokesperson for the outlawed terrorist group escaped during an operation against terrorists being conducted on the basis of information gleaned from him.

Ehsanullah, who became the spokesperson for the breakaway Jamaatul Ahrar faction after the TTP split, had voluntarily turned himself in to the intelligence agencies on Feb 5, 2017 – and remained in custody ever since.

However, he had started sharing sensitive information with the security forces much before his surrender, the sources said.

More than two months after his surrender, Ehsanullah recorded a confessional statement on April 26, 2017, in which he had unmasked his handlers and facilitators. He had also condemned terrorist acts and the extremist ideology he once espoused.

“The so-called jihadis have misled people in the name of Islam, especially the youth,” he had said in the scathing confessional statement. “The crimes such as bombing public places and attacking schools and universities traduce Islamic teachings.”