'PTI govt will fail like its predec­essors if ‘correc­t econom­ic decisi­ons’ not taken'
By Shahbaz Rana
Published: February 13, 2020
Tweet Email 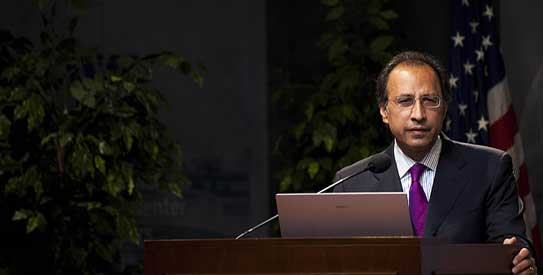 ISLAMABAD: The de facto finance minister on Wednesday warned his government that it would also fail like its predecessors if “correct economic decisions are not taken”.

The ominous warning by Dr Abdul Hafeez Shaikh, the prime minister’s aide on finance, appears to suggest an internal strife between proponents and opponents of “populist decisions” of the government.

“If we do not take right decisions, it is likely that we would also fail,” said Shaikh while delivering his first speech in 10 months on the floor of the National Assembly.

“The last government did not maintain fiscal discipline for the sake of protecting its popularity and winning elections,” said Shaikh.

The PML-N government ran an economic system where value of the dollar was artificially kept low by a combination of using foreign exchange reserves as a buffer and allowing cheap imports into the country, he added.

In this context, Shaikh said the PTI government could also fail, if it did not take corrective measures. “For a sustainable development, taking right decisions remain the biggest challenge,” he added.

The finance ministry has not issued any supplementary grant during the past seven months in an effort to maintain fiscal discipline.

It has also not taken a decision about bringing salaries of the Federal Investigation Agency (FIA) at par with those of the National Accountability Bureau (NAB).

“The Finance Division has yet not taken a decision with regard to the FIA salaries and the file remains at my desk,” Finance Secretary Naveed Kamran Baloch told The Express Tribune.

Shaikh’s statement came a day before the conclusion of the ongoing talks with the IMF second programme review. The global lender has been demanding around Rs200 billion mini-budget and notifying an increase in electricity tariffs to keep the programme on track.

However, the government is reluctant to take the politically unpopular decisions and is trying to convince the lender to drop the demands.

At the same time, the FBR has made preparations for a mini-budget that would be enforced once the political leadership takes its ownership.

While delivering his first speech in the lower house of parliament, Shaikh sensitised the parliamentarians about the adverse impacts of the electoral system that, according to him, was proving destructive for the economy due to delays in taking tough economic decisions.

The PML-N government had left behind a Rs1.2 trillion circular debt in the power sector, said Shaikh.

However, a story appeared in The News on Wednesday stated that the PTI government has added nearly Rs800 billion more in the debt, taking the figure to a whopping Rs1.9 trillion.

He said it was painful for him when the opposition termed SBP Governor Dr Reza Baqir and him the “IMF men”.

“Some people have claimed that those involved in negotiations with the IMF were the same people,” he said.

“We should be proud of Reza Baqir who studied in the best American universities after completing his studies in Lahore.”

“Those who do not have the credentials to even enter the halls of IMF are criticising the SBP governor for having worked there,” said Shaikh while taking a jibe at the opposition parties.

Responding to Shaikh’s criticism, former prime minister Shahid Khaqan Abbasi said no one doubted anybody’s loyalty and abilities, challenging Dr Baqir and Shaikh to commit that they would not leave the country for next ten years.

Shaikh said Pakistan’s economy and exchange rate have stabilised, adding this “offers opportunities for businessmen to invest in Pakistan”.

“This government has taken some decisions which are historic, including one the big decision of freezing the budget of Pakistan Army,” he added.

Shaikh said the primary budget surplus was achieved for the first time in years during first half of the current fiscal year. He said the overall budget deficit also stood at 2.3% of Gross Domestic Product during the first half.

Coming to the revenues collected by the government, Shaikh said non-tax revenue has increased by 170% in the first half the fiscal year, and as against the annual non-tax revenue of Rs1.1 trillion, Rs1.5 trillion would be collected.

Abbasi responded to Shaikh’s speech and taunted him by saying that “the economic picture painted by the adviser was not in the knowledge of anybody in Pakistan”.

Abbasi said there was an economic meltdown in the country and if the finance adviser believed what he was saying, then he could only sympathise with Shaikh, the government and the people of Pakistan because none of it was based on facts.

He claimed that if the PTI-led government completes its five-year term, the country’s debt would be doubled.