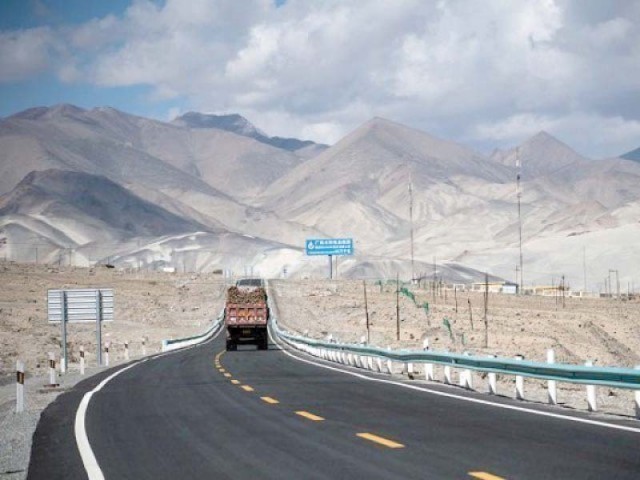 Although the CPEC Authority has started its work, it largely remains dysfunctional due to administrative and financial constraints. PHOTO: FILE

ISLAMABAD: A powerful group in the federal bureaucracy has blocked the appointment of chief executive officer of the China-Pakistan Economic Corridor (CPEC) Authority, which is undermining work at the authority ahead of an all-important visit of the Chinese president to Pakistan.

The issue of appointment of the CEO, who will also act as the Principal Accounting Officer (PAO) of the authority, has further complicated matters for the new management as the authority is facing serious financial and human-resource-related issues in its infancy.

Against the demand for a Rs359-million budget to make the authority fully operational, the Ministry of Planning has given only Rs121.4 million – one-third of the demand – for the remaining period of the current fiscal year. Some of the cuts in the budget by the planning ministry were justified as the authority had sought funds for the purchase of luxury SUVs.

Baloch is a foreign-qualified officer of the Pakistan Railways’ civil service cadre, which has apparently become a reason for blocking his name, the sources said. Baloch has done MSc in Transport Engineering from the University of Leeds, England.

The Prime Minister’s Office had been sent Baloch’s appointment summary over a month ago, official documents, available with The Express Tribune, showed.

However, certain top-level officers in the bureaucracy have approached the CPEC Authority chairman, asking him to pick someone from the Pakistan Administrative Service, formerly DMG, the sources said.

Through a presidential ordinance, the Pakistan Tehreek-e-Insaf government had set up the CPEC Authority in October last year. According to the law, the authority will comprise a chairperson, chief executive officer, executive director (operations), executive director (research) and six members.

The CPEC Authority will interact with China for identifying new areas of cooperation. It will organise meetings of the Joint Cooperation Committee (JCC) and joint working groups of CPEC, and ensure inter-provincial and inter-ministerial coordination for CPEC-related activities, according to the law.

Although the CPEC Authority has started its work, it largely remains dysfunctional due to administrative and financial constraints. All this is happening at a time when Chinese President Xi Jinping is expected to visit Pakistan in the next three to four months to give a new push to CPEC.

During the Chinese president’s trip, some major announcements are expected, including on the much-delayed $9.2-billion Mainline-I (ML-I) railway project of CPEC.

Ghulam Dastgir Khan is currently serving in the Ministry of Planning and Development. The CPEC Authority chairman sent requisition of the officer to the planning ministry five weeks ago. The CEO will be a civil servant of BS-20 or above, who shall be appointed on deputation, states the CPEC Authority Ordinance.

The establishment secretary had forwarded the summary to the PM Office for approval on January 7.

“Ghulam Dastgir Khan Baloch, a BS-20 officer of Railways, may be transferred and posted as Chief Executive Officer, CPEC Authority, Islamabad on deputation, for a period of three years, with immediate effect and until further orders,” said the Establishment Division summary. Under the CPEC Authority Ordinance 2019, the prime minister is the competent authority to appoint the CEO. Sources said instead of seeking the PM’s approval, the secretary to PM informally asked to review the name of Dastgir.

Secretary to PM Azam Khan did not respond to the question whether the PM has approved or rejected the proposed name for the CEO. Comments of the planning minister were also awaited.

Under the CPEC Authority Ordinance, the government has given complete financial autonomy to the authority. In December last year, the CPEC Authority chairman demanded Rs359 million to make the body fully operational, according to official documents. However, last month, the planning ministry communicated to give only Rs121.4 million – Rs237.6 million or 66% less than the demand. The planning ministry did not agree to the CPEC Authority’s request for creation of 117 posts and instead, it sent a summary to the Establishment Division to sanction only 70 posts, according to the official documents.

Against the demand for Rs103.53 million for employees-related expenses, the planning ministry approved Rs36.7 million, 64.5% less than the demand.

The Ministry of Planning has made Rs5-million allocation against the demand for Rs20.5 million for travel purposes. For physical assets, the CPEC Authority sought Rs145 million, mainly to purchase two SUV Fortuners, one Land Cruiser, six Toyota Corollas and three Cultus vehicles. But the planning ministry approved the budget for the purchase of four 1,300cc cars and two motorcycles.