Protest against IOK lockdown outside Indian Consulate in Italy

Protest against IOK lockdown outside Indian Consulate in Italy

Carrying the flags of Pakistan and Azad Jammu and Kashmir (AJK), the protesters chanted anti-India and pro-Kashmir freedom slogans.

The protest was organised by Tehreek-e-Kashmir (TeK) Europe Italy in front of the Indian Consulate.

On this occasion, President TeK UK Raja Fahim Kayani, who especially reached Milan from the United Kingdom (UK) to join the protest, said: “Kashmiris are fighting for their freedom as per the UN resolutions and it is the duty of big powers of the world to come forward and stop human rights violations in (IOK).”

“European Union should take notice of curfew and communication blackout in IOK. There is a curfew in the valley by the Indian army since August 5, 2019. Political leadership has been detained under draconian and black laws like the Public Safety Act (PSA).” 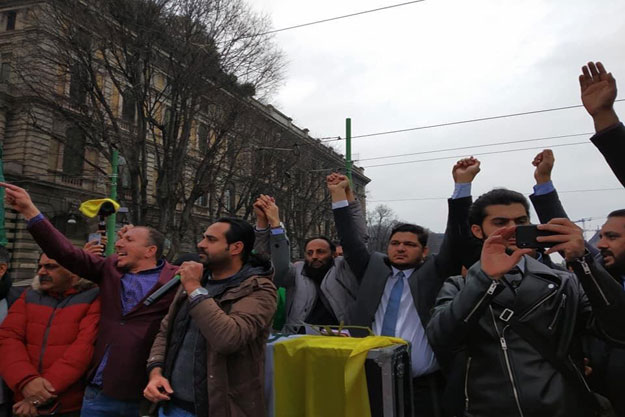 Addressing the rally, President TeK Europe Italy Chaudhry Maqsood Aslam said, “The protest is against the rising human rights abuses which are being carried out in IOK by the Indian army. It is now time for Europe to raise its voice against Indian brutalities in the disputed valley.”

A former TeK Europe President Tanveer Kadhar said, “From one side, this protest is against the Indian state terrorism in the IOK, and on the other, we want to express solidarity with the Kashmiri people that they are not alone in their self-determination movement.”

Kadhar added that they would continue to raise their voices for the voiceless Kashmiris.

Latter the protesters marched towards the Indian Consulate, recorded their protest and expressed solidarity with IOK.