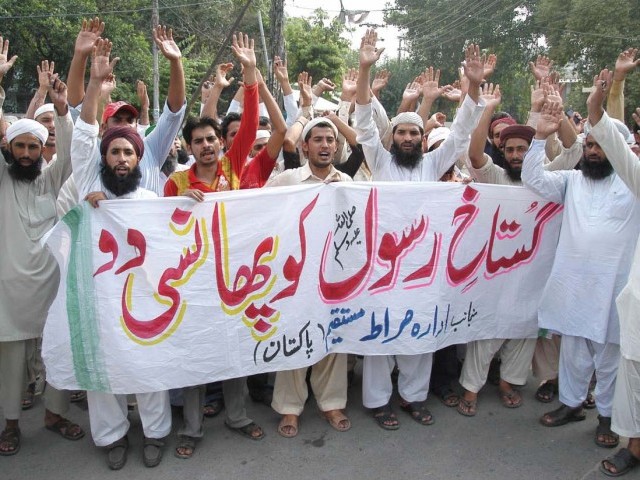 Policemen from Ghaziabad and Mughalpura stations baton charged some 300 protesters from the Barelvi sect in front of the Lahore Press Club on Friday.

Main Attiqur Rehman, a property dealer who has accused a business rival of blasphemy, claimed that the police had tried to arrest him in the moving to halt a protest scheduled for after Friday prayers.  The protesters rallied in front of the club to condemn the raid and police for not registering a blasphemy case following Rehman’s complaint.

Rehman said that the police entered his house to arrest him but later left after people gathered outside the house and shouted at the police.  He said on June 19, Haji Nasir Hussain a resident of Canal Park, Singhpura, had organised a majlis, where one of the speakers, Zulfiqar Haider Naqvi, uttered blasphemous remarks against the Holy Prophet (pbuh).

He said the next day he filed an application with the Ghaziabad police station against Hussain and Naqvi and demanded an FIR under Section 295-C of the Pakistan Penal Code.

He said when the police refused to register the FIR, he went to the court and obtained an order from Additional District and Sessions Judge Mahrukh Aziz Tarar in this regard. He said that despite the court order, SHO Adnan Sheikh refused to register an FIR. He said he gave the police till Thursday to comply with court order otherwise he would lead a protest demonstration on Friday after the prayers.

He said a police team headed by DSP Mian Absar Ahmad had raided his house only to halt the protest.

Rehman warned of more protests if an FIR was not registered. “I would prefer death to seeing a blasphemer go unpunished,” he said.

DSP Ahmad denied raiding Rehman’s house. He said however, the court had not ordered registration of an FIR. It had only ordered the police to investigate the matter.

Haji Hussain said that the speakers had not made any blasphemous remarks. He said he and Rehman were businesses rivals and that was the only reason Rehman had accused him of blasphemy.