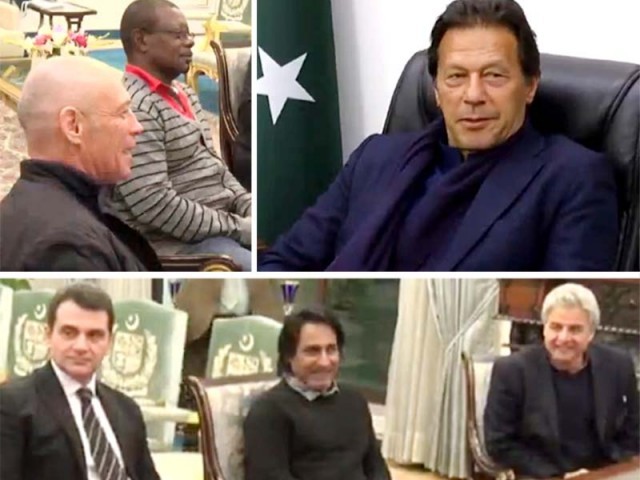 ISLAMABAD: Former cricket stars from West Indies and New Zealand along with their Pakistani colleagues met Prime Minister Imran Khan at his office on Monday.

The former greats are currently in Pakistan for the Bangladesh Test and ODI series.

The two teams played three T20s in January. A one-day international (ODI) and one Test match will be played in Karachi in April. Pakistan won the first Test at Rawalpindi on Sunday.

Cricket with India not possible due to Kashmir situation

Pakistan saw absence of international cricket after a terrorist attack on a Sri Lankan team in Lahore in 2009. The drought ended in 2015, when Zimbabwe cricket team toured Pakistan for a one-day and T20 internationals, played in Lahore.

Sri Lanka were the first team to play Tests in Pakistan after a gap of 10 years. The team played three ODIs and three T20 matches in September and October last year, followed by Test matches in Rawalpindi and Karachi.

Bangladesh’s team arrived in Islamabad on Wednesday to play a two-Test series of the World Test Championship. PM Imran welcomed the Bangladesh Tigers to Pakistan and expressed satisfaction on the return of the longer format of cricket to the country.

“I welcome the Bangladesh cricket team to Pakistan and the resumption of test cricket in Pakistan,” Imran, the captain of the 1992 World Cup winning Pakistan cricket team, posted on his twitter account.

After the first Test against Bangladesh, the fifth season of the Pakistan Super League (PSL) will kick off with much fanfare on February 20, featuring internationally-famed stars as members of Islamabad United, Karachi Kings, Peshawar Zalmi, Quetta Gladiators, Lahore Qalandars and Multan Sultans.