‘Shocked’ over team participation: India warned against politics over sports

‘Shocked’ over team participation: India warned against politics over sports 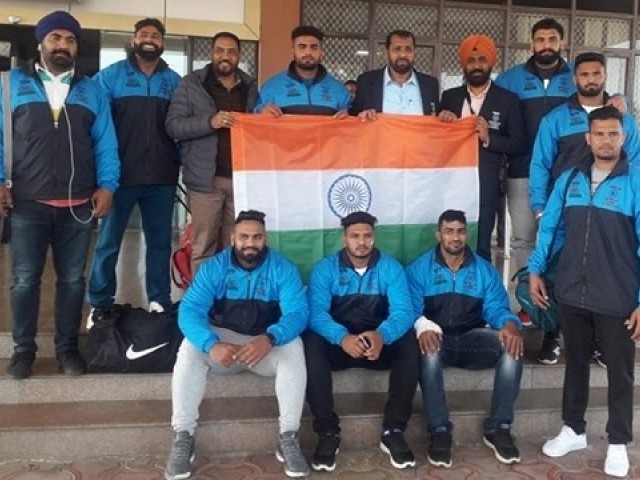 LAHORE: The Pakistan Kabaddi Federation (PKF) on Monday warned India against mixing sports with politics after the participation of the Indian team in the ongoing Kabaddi World Cup 2020 kicked off a controversy with the sports ministry and the game’s federation.

The Indian Olympic Association (IOA) was left in shock after an 'unofficial' Kabaddi team from India reached Pakistan to take part in the World Championship.
Read the full story: https://t.co/I5iRVqqwIY pic.twitter.com/MjJ5nqo3UE

According to the Hindustan Times newspaper, the sport ministry had not granted permission to any athlete to travel to Pakistan, while the Indian Olympic Indian Olympic Association (IOA) denied any knowledge of the team’s participation in the world cup.

Chaudhry Shafay Hussain, President of the PKF said that “enemy elements” were conspiring against the tournament by creating confusion. “The fact is that the Kabbadi World Cup is being orgainsed for the first time in Pakistan. The tournament is being organised in the name of Baba Guru Nanak. The members of the Indian team had also perform their religious rituals,” Hussain said.

PKF Secretary Rana Sarwar insisted that the Indian team was India’s national team and cautioned against mixing sports and politics. He described the statements of the Indian officials as internal rifts between their national bodies.

India had hosted all the six-circle-style previous kabbadi world cups. Pakistan is hosting the event for the first time ever, which is being attended by nine teams, including Iran, Canada, Australia, United States, Sierra Leone and Kenya.

The Indian team reached Pakistan via Wagah border on Saturday. “The IOA has not approved and it has also not been approved by the federation [Amateur Kabbadi Federation of India (AKFI)], so I don’t know who has gone, IOA chief Narinder Batra was quoted by The Hindustan Times as saying.

For any Indian team to participate in international competitions, the relevant body of the sport needed to seek permission from the sports ministry which then get clearance from the external affairs ministry and the home ministry, according Indian media outlets.

Batra said that the team’s travel to Pakistan was not approved by the government. “I have seen statements from the [sports] ministry, which confirm they have not approved anyone. So I don’t know who they are and what the story is,” Batra said.

SP Garg, the administrator of AKFI told the newspaper that the federation had not granted permission to any team to take part in the Kabaddi World Cup in Pakistan, adding that the authority discovered that players from India had gone only after information was sought.

Reports on Sunday indicated that the Indian authorities suspended two immigration officials at the Indian side of the Wagah border for allowing the team without government’s approval. The reports said the Indian government had also initiated an inquiry into the matter.

Sikander Singh Maluka, the head of the [Indian] Punjab Kabbadi Federation, said that the visiting team had not been sent by India officially. He revealed that the PKF had sent them the invitation for the tournament on the occasion of 550th birth anniversary of Guru Nanak.

“We replied that the relations between the two countries are not good at present, so we cannot send the national team. But since, the tournament had been held in the name of Baba Guru Nanak, so if any player wanted to participate in his individual capacity, we will not stop him,” he added.

The news of the world cup had been circulating in the media for quite some time but the government kept mum throughout. And also the team travelled from Amritsar to the Attari under official protocol amid strict security measures.

The Indian team had not given any comments on the controversy. However, talking to reporters after reaching Lahore, Indian coach Harpreet Singh and captain Gurlal Singh had said that the Kabbadi team did not need any no-objection certificate from the government to travel abroad. “We already have traveled to several countries without the NoCs,” Harpreet Singh told reporters.

Sarwar said that there should be no politics in sports. “It should not be made an issue whether or not the Indian team has come after getting an NoC [from their government],” he added. “They have completed the process of the visa.”