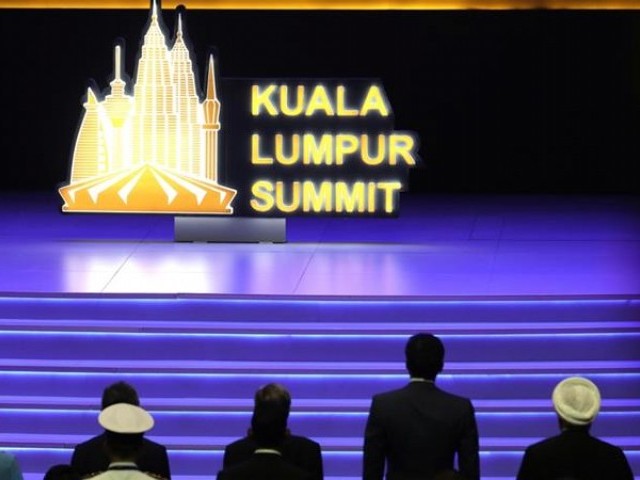 A Reuters image of the Kuala Lampur Summit.

Most in the Muslim world remain undecided about the way citizenry should be governed. The conflict among different styles of governance tried in the non-Muslim part of the world remains unresolved. Before discussing the four possible ways the world of Islam could go, we need to answer an important question: Why has nationalism not taken root in the countries where Islam is the faith of most of the citizenry? The closest Muslims have come to nationalism is in the Arab world. Even there nationalism has remained weak in spite of the creation of intuitions such as the Arab League to promote it. Gamal Abdel Nasser who once governed Egypt as the country’s president attempted to make Arab nationalism the basis of creating a new country incorporating his own and Syria. He did not succeed.

There is a marked absence of nationalism in Pakistan – one reason why the country failed to maintain the form in which it was created, in 1947. In Pakistan’s case, ethnicism proved to be a more important basis of nationhood than religion. Although the original Pakistan was created in the name of religion, Bengali nationalism proved to be a more powerful binding force than religious affiliation.

Nationalism has several origins. There is primordealism according to which there have always been nations and that nationalism is a natural phenomenon that cannot be easily extinguished. Then there is ethno-symbolism that views nationalism as an ethno-centric phenomenon. In this way of interpreting nationalism, myths and traditions become more important. It is this aspect of nationalism that is informing India’s rapid descent into extremist Hinduism. The belief that the mythical Hindu god, Rama, was born in a place called Ayodhya in the state of Uttar Pradesh is one such belief that has powered the adherents of Hindu extremists to destroy the place of Muslim worship built in the sixteenth century by a Mughal king. Called the Babri mosque, the campaign in favour of its destruction was led by Lal Krishna Advani who went on to become India’s deputy prime minister in a Bharatiya Janata Party government led by Atal Bihari Vajpayee.

The third definition is described as “civic nationalism” which is the consequence of dissatisfaction with traditional identities. It adopts modern symbols such as a flag to represent the people. The United States’ “star spangled banner” – the country’s flag – is the most familiar example of this phenomenon. The American attachment to the flag is an interesting feature of the country’s nationhood. The respect granted to the flag as a symbol remains although its form keeps changing. The number of stars in the northeast corner of the flag has increased from 13 to 50. There were thirteen states in the union when it started its life as an independent nation. It now has 50 states, the number of political entities now in the United States of America.

Other examples of civic nationalism are the Greek Revolution, the Irish Revolution, the Zionist movement that resulted in the creation of the Jewish state of Israel. In fact, Israel is an interesting example of nationalism since it brings together all the three elements of the phenomenon described above.

The Muslim world is engaged in political experimentation. Isolation from the rest of the world is no longer a practical proposition. Even then some of the Muslim majority countries – in particular those in the Arab world – have adopted what they like to call the Shariah rule. This is supposed to follow the dictates on governance as can be gleaned from the Quran. The emphasis in the systems that like to be called “Islamic” is on social behaviour rather than on religious practices. “Islamic punishments” are followed in order to bring people into line. Until the reforms introduced by Muhammad bin Salman, MBS, the Kingdom of Saudi Arabia was governed on these bases. This was also the case with the Islamic Emirate of Afghanistan when Taliban’s Mullah Muhammad Omar governed from Kabul for five years.

According to this way of governance, women were regarded as strictly inferior to men with highly restricted social space. They were not allowed to drive or appear in public unless accompanied by men related to them. The Taliban went beyond the practices in Saudi Arabia, the model of governance they said they were following. They banned women from attending educational institutions, even primary schools. Women of all ages were not allowed to step outside their homes unless all parts of their bodies were properly covered from being viewed. They were not allowed to work; their only purpose in life was reproduction. They could not go to public places such as restaurants and were not allowed to select their life partners. Prime Minister Imran Khan has often described the Medina system of governance as the ideal to which all Muslim countries should aspire. The focus of that system was on human welfare; the Islamic state’s main purpose was to ensure that the disadvantaged segments of society were properly cared for.

The second system of governance was tried by the Islamic State of Iraq and Syria Caliphate under the leadership of Abu Bakr al-Baghdadi. The system he sought to establish was done by the use of extreme and brutal force. Order was maintained in the conquered territories by punishments not found in the Quran or the Hadith. The ISIS would have gained more territory – at one point it governed the area equal to that of Britain – if it had not been beaten back by the United States working with other Western powers. The West felt threatened not because it was likely to lose territory to the Caliphate but because it was succeeding in attracting large number of its citizens from becoming jihadists.

Another form of governance in Muslim lands is commonly referred to as “Political Islam”. The only time this system was tried was when Muslim Brotherhood Party gained power in Egypt and Muhammad Morsi became president. This happened because the movement referred to as the “Arab Spring of 2011” was able to force out a number of long-serving authoritarian rulers. Among those who lost to public resentment was Egypt’s Hosni Mubarak. His departure resulted in the country holding its first free and fair election in which the Brotherhood scored an easy victory. While Morsi was not a dictator, he introduced a system that restricted the space available to individuals as compared to the state. The dispossessed youths who had staged the Arab Spring were unhappy and encouraged the military to return to power.

The fourth system being experimented in the Muslim world follows the approach that is generally referred to as western representative democracy. Pakistan and Malaysia are the two obvious examples among the fifty or so Muslim majority countries where this system has begun to throw roots into the political ground. Their success will have great meaning for the rest of the Muslim world.

PM Imran’s no to national reconciliation