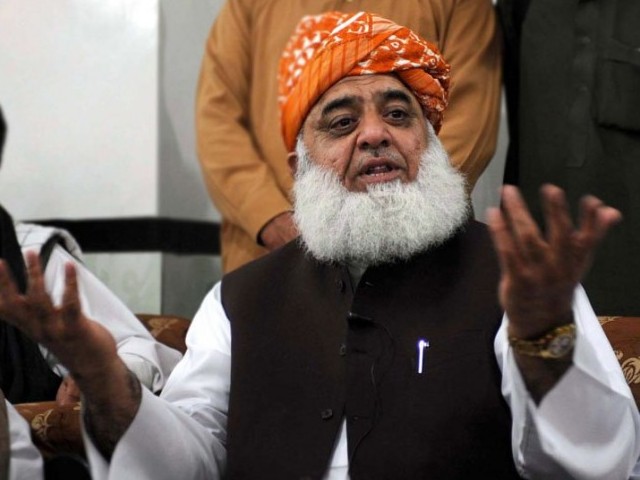 LAHORE: Maulana Fazlur Rehman, the chief of his eponymous faction of Jamiat Ulema-e-Islam, on Sunday revealed that he had called off his party’s anti-government sit-in in Islamabad last year after he was assured that Prime Minister Imran Khan would resign, followed by fresh elections.

The cleric also announced that he was launching the third phase of his anti-government movement, claiming credit for the government’s coalition partners going public with their disillusionment with the ruling party.

“I ask [Punjab Assembly speaker and PML-Q leader] Chaudhry Pervaiz Elahi to disclose the secret… the secret that I was assured that the prime minister would resign and free and fair elections would be held within three months of his resignation,” the JUI-F told reporters after a meeting with Senator Sajid Mir, a central leader of the Markazi Jamiat Ahl-e-Hadith, in Lahore.

The Maulana was referring to the reconciliatory role played by Elahi in ending the two-week-long anti-government protest, dubbed as ‘Azadi march’ by the JUI-F.

After calling off the sit-in, which the JUI-F chief had described as Plan A of his movement to dislodge the government, he moved on to Plan B by blocking major thoroughfares across the country but the protests soon fizzled out after failing to maintain momentum.

The cleric arrived in the provincial capital of Punjab on Saturday to chalk out a strategy to launch the third phase of his protest movement, which he had launched October last year to topple the incumbent PTI government accusing it of coming into power through rigged elections.

He said as part of the campaign, the JUI-F would stage a “grand public gathering” in Lahore on March 19 followed by a similar rally in Karachi on March 29.

“A national convention would also be held in Islamabad on March 1 to unite the people on one platform,” he added.

Fazl claimed credit for the recent rifts between ruling PTI and its estranged allies. The committees formed by the Prime Minister Imran Khan to address the grievances of the coalition partners have failed to make any breakthrough thus far.

“It is because of the Azadi March that cracks have appeared between the PTI and its coalition partners,” he maintained.

He, however, conceded that the lack of consensus among the opposition ranks had strengthened the government.

The JUI-F chief said he was not in contact with the two major opposition parties — the PML-N and the PPP — after both had voted for the extension in the services chiefs tenure bill in the parliament.

“The PML-N and the PPP are not a part of our movement at the moment, however the doors for discussion are open,” he added.