US forces come under 'direct fire' in eastern Afghanistan

US forces come under 'direct fire' in eastern Afghanistan 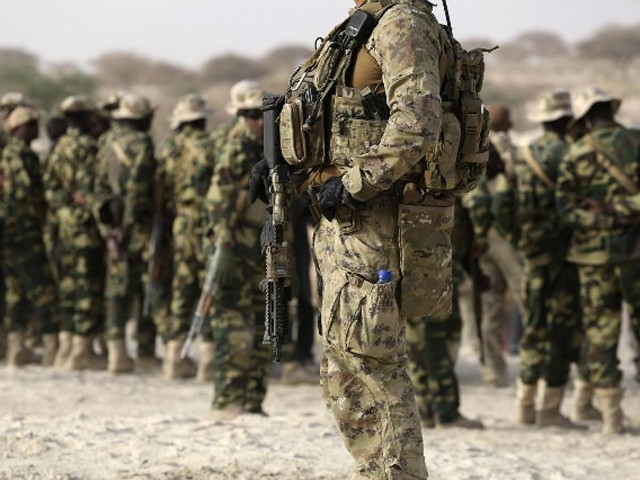 Casualties yet to be ascertained in ‘green-on-blue’ attack -- in which Afghan security forces target foreign soldiers. PHOTO: REUTERS/FILE

KABUL: US and Afghan troops came under “direct fire” in eastern Afghanistan late Saturday, a US military official said, in an incident local media described as an “insider” attack.

“A combined US and Afghan force conducting an operation in Nangarhar Province was engaged by direct fire on Feb. 8”, US Forces-Afghanistan spokesman Colonel Sonny Leggett said in a statement.

No group immediately claimed responsibility for the apparent “green-on-blue” attack — where Afghan security forces target international soldiers with whom they are working.

An Afghan official, speaking on condition of anonymity, said the attack happened in the Shirzad district military headquarters, and that foreign forces had cordoned off the area.

“Several helicopters landed in and departed from the HQ compound taking out casualties. We don’t know how many killed or wounded,” the official told AFP.

The latest incident comes even as the US and Taliban negotiators are seeking to reach a deal that would allow the United States to withdraw thousands of troops from Afghanistan after more than 18 years of war.

Last year was the deadliest for US forces in Afghanistan since combat operations officially finished at the end of 2014, highlighting the challenging security situation that persists.

In July, an Afghan soldier killed two US troops as they were visiting an Afghan army base in Kandahar.

US President Donald Trump has long questioned the wisdom of keeping troops overseas and has described the war in Afghanistan launched after the September 11, 2001 attacks as a drain on blood and treasure.

But last year he cancelled a previously unannounced summit at the Camp David presidential retreat with the Taliban because of an attack that killed an American.

He later allowed veteran US negotiator Zalmay Khalilzad to resume the talks, which had taken place for months in Qatar.

As talks have fluctuated, violent attacks in the country have raged, with the number of clashes jumping to record levels in the last quarter of 2019, according to a recent US government watchdog report.