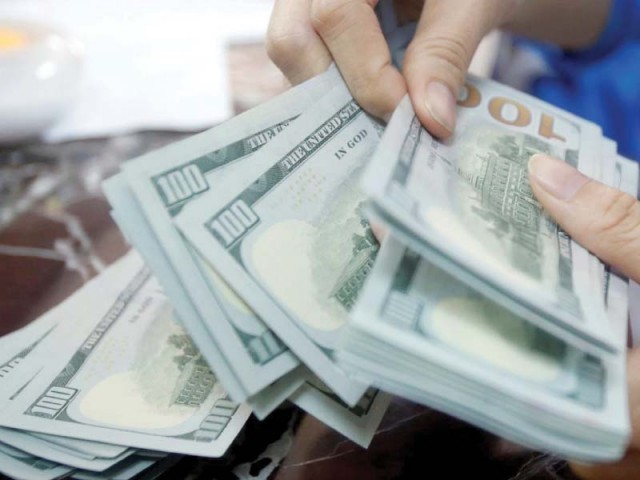 Pakistan's foreign currency reserves are consistently on the rise for the past seven months. PHOTO: REUTERS

KARACHI: Pakistan’s foreign currency reserves have been consistently on the rise for the past seven months as they hit an almost two-year high at $12.27 billion in January. However, the reserves held by the commercial banks saw a continuous drop in the past six months.

But in addition to this, the State Bank of Pakistan’s (SBP) decision to allow commercial banks to make advance payments of up to 100% for imports after the central bank returned around $2 billion to commercial banks in loan in the recent past; barring non-filers of tax returns from opening foreign currency accounts around a year ago; and withdrawal of such deposits by accountholders on rumours that the reserves-strapped government may seize foreign currency deposits to avert default on import payment and debt repayments are apparently some other reasons behind the decline in reserves held by commercial banks, they added.

In addition to this, the return of stability and then recovery in rupee against the dollar and the government’s resolve to gradually soften rules to step up economic activities prompted the central bank to allow commercial banks to make advance payments for imports, analysts said.

The central bank allowed commercial banks making advance payments up to 100% in phased manners. It allowed them to make the payment of up to $10,000 in November, by up to 50% in December and now up to 100% on import of machinery, plant and raw material in late January.

One cannot also rule out that the depositors withdrew foreign currencies from their accounts on rumours that the government was considering ceasing their accounts to avert the then default on import payment and debt repayment. “The government, however, did not do so, nor was it apparently intended to do that,” he said.

JS Global Head of Research Hussain Haider recalled the foreign currency reserves had continued to increase at commercial banks, while the ones held by the central bank depleted in the past when rupee-dollar parity was extremely volatile and the local currency lost over 55% during December 2017 to June 2019.

Now, the situation is on reverse. The rupee is gaining ground against the greenback. SBP reserves are on rise and the reserves held by commercial banks are declining, he said.

Banks are offering up to 12% return on rupee-based fixed deposits against 1-2% on foreign currency deposits.

Foreigners have invested close to $3 billion in rupee-based sovereign debt securities (T-bills and Pakistan Investment Bonds) since July to date.

An analyst recalled the government barred non-tax filers from opening accounts in foreign currencies around a year ago. How can deposits grow when the number of depositors remained stagnant, he questioned.

Pakistan’s foreign currency reserves are consistently on the rise for the past seven months. They soared to an almost two-year high at $12.27 billion on January 31, 2020 compared to the then multi-year low at $7.08 billion on July 5, 2019, according to SBP.

The reserves are on rise mainly due to 75% contraction in current account deficit (CAD) due to 20% drop in import of goods. Besides, foreign investment in sovereign debt securities and International Monetary Fund’s (IMF) two tranches totalling around $1.5 billion since July also helped significantly building up SBP reserves.