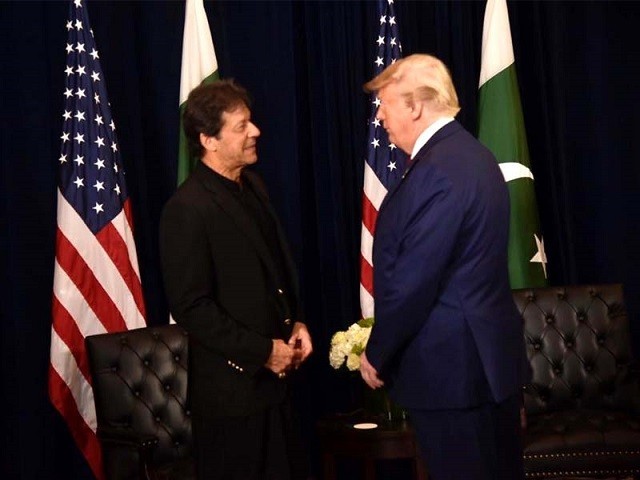 If the relationship between America and Pakistan is to take the ‘10-year challenge’ on social media, the transformation would be almost unbelievable. From a low trust, do more, frequent breakdown in communication relationship, we now have President Donald Trump and Prime Minister Imran Khan meeting three times in just 7 months. Trump famously proclaimed that the US and Pakistan could do ‘10 and even 20’ times the amount of bilateral trade and investment we’re doing now. America’s biggest critique of Pakistan has pivoted away from terrorism and Taliban to our relationship with China. What’s going on here?

Pakistan’s relationship with America has often been described as the love-hate relationship. The primary driver of the recent improvement in our relationship appears to be Pakistan’s constructive role in facilitating the Afghan peace process. “Pakistan is playing a very different role today in the Afghan peace process versus what they did during the Obama Administration,” shares Vali Nasr, one of the most prolific and astute observers of the region, who also served as a Senior Advisor to US Special Representative for Afghanistan and Pakistan, Ambassador Richard Holbrooke, between 2009 and 2011.

“Afghanistan matters to President Trump,” shares Nasr. “And Pakistan understands that Trump is serious about negotiating with the Taliban and withdrawing from Afghanistan. The change in Pakistan’s role in facilitating the peace process is very clear in Washington DC.”

Another important factor in the upswing in relations between the two countries is the personal relationship between Trump and Khan. “At a time when American diplomacy is personalized around Trump, three meetings between him and Prime Minister Imran Khan elevate the status of Pakistan,” shares Nasr.

More interestingly, anti-US sentiment on Pakistani streets has also sharply receded. Part of the credit for this goes to the deep investments the US has made within Pakistan. Besides, at 29,000 people, Pakistan also has the largest alumni network for US exchange programmes, who serve as a critical bridge for understanding and empathy between the two countries.

Moreover, the Pakistani American community is also coming of age, with sincere and unprecedented efforts to organise, mobilise and institutionalise their representation in American society. I believe we could see a Pakistani American elected to Congress within this decade. And it’s not just on the political side but also when it comes to business, social work and media representation, where Pakistani Americans are stepping up to plate. For example, take a tour de force like Shamila Chaudhary, who after serving as the Pakistan Director at the National Security Council under the Obama Administration, has recently come onboard as the President of the American Pakistan Foundation.

However, as is always the case with relations between Pakistan and America, the good times don’t always last and are not always what they appear to be. In my conversation with Nasr, he argued that Pakistan’s relationship with America was built around counterterrorism from Musharraf’s time and there’s not much depth or anchoring for the relationship after the Afghanistan war ends. An 80s-style US withdrawal from Afghanistan would mean there’s little to hold this relationship together or strengthen it. Moreover, America is obsessed with China’s rise and while India is a counterbalance to China, Pakistan is a problem because of CPEC. Net, Nasr’s argument is that Pakistan-US relations look a lot better on optics than they do on substance.

While I agree to Nasr’s argument, the progress made in the Pak-US ties over the last 12 months is palpable. What’s important now is to build on this progress by creating more depth in the relationship through Pakistan becoming a serious economic player in the region, people-to-people contact and the Pakistani American diaspora rising to serve as a bridge and shock absorber for the relationship between the two nations.

A slide into the abyss