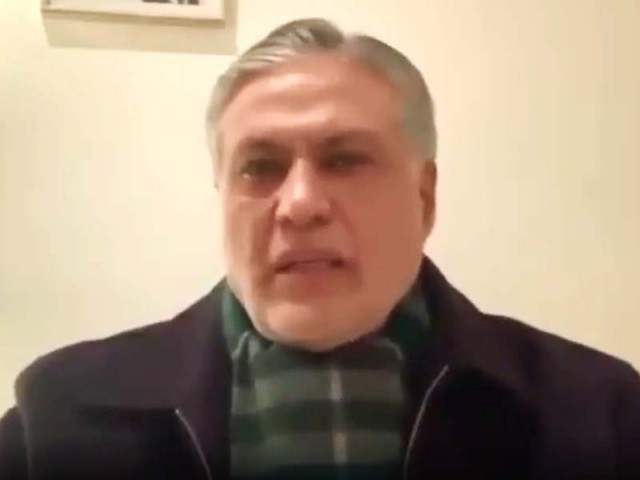 LAHORE: A day after the Punjab government converted the residence of Ishaq Dar into a Panagah [shelter home], the absconding former finance minister denounced the move as “unprecedented political victimisation” of opposition leaders.

“I’ve come to know that the nexus between [prime minister] Imran Niazi and the Punjab government has designated my residence as a ‘shelter home’ after failing in their bid to auction my property,” Dar said in a video statement posted on the PML-N’s official Twitter handle on Saturday.

Ishaq Dar, who lives in self-imposed exile in London, announced that he would file a contempt of court application against the provincial government for violating the Islamabad High Court’s Jan 28 directives.

The IHC has barred the government from auctioning Dar’s residence in Lahore’s Gulberg Town while hearing a petition filed by the former finance minister’s Tabassum Ishaq against the accountability court’s verdict.

In her petition, she has contended that she is the owner of the property because it was given to her by her husband as Haq Mahr (dower) on Feb 14, 1989.

“I will approach the court because this is a contempt of court,” Dar can be heard saying in the video statement. He added that the decision to auction his house was taken on the basis of a “flawed” court order which declared him absconder in the assets-beyond-means case.

“Declaring me absconder was unjust. I had submitted medical reports verified by UK authorities and I have also filed an application in the Supreme Court against the [accountability court] verdict which is pending hearing,” he added.

Terming the case mala fide, the PML-N leader said it was based on the findings of a Joint Investigation Team (JIT) which “falsely” accused him of not filing tax returns for 20 years.

“I have evidence and documents and I hope that courts in Pakistan will serve me justice,” Dar said, adding that he could have also approached the international forums against the injustice done to him by the incumbent government but he chose not to.

Dar has been absconding court proceedings since 2017 following the registration of a corruption reference against him. Later, the National Accountability Bureau (NAB) confiscated his various bank accounts worth Rs500 million and his sprawling house constructed on a pieces of land measuring four kanals and seven marlas.