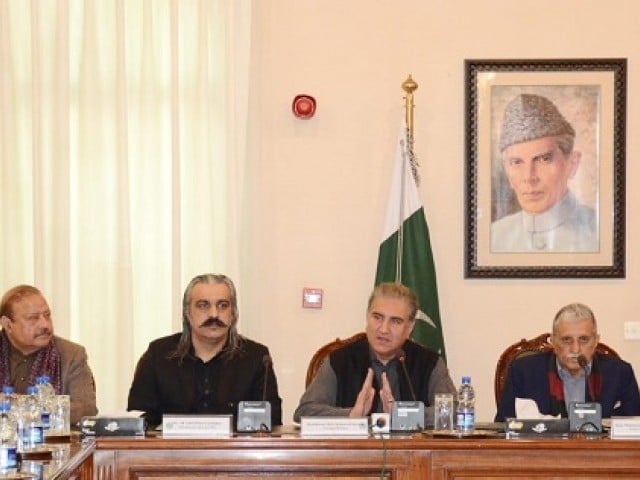 Foreign Minister Shah Mahmood Qureshi on Saturday reiterated Pakistan’s political and moral support for the oppressed people of Indian-Occupied Kashmir (IOK) in their struggle for the right to self-determination.

While addressing a meeting with parliamentary leaders of Azad Jammu and Kashmir (AJK) in Islamabad, FM Qureshi said that Pakistan has made extensive efforts to highlight the gross human rights violations in the occupied valley by Indian government at the diplomatic level.

No solution to Kashmir issue sans consent of its people, says AJK president

The foreign minister stressed that the Human Rights Council in Geneva had also been apprised of the Indian atrocities in the besieged region. He added that the issue had also been debated at European Union Parliament and the United States Congress.

“The Kashmir Cell established at the Ministry of Foreign Affairs on the direction of the prime minister is playing its effective role to highlight the Kashmir issue,” FM said.

The AJK PM emphasised on making joint efforts effectively on an international level highlighting the Kashmir issue. The suggestions were welcomed by FM Qureshi.

The participants stressed that India’s continued belligerence and aggressive measures posed a serious threat to regional peace and security.

They reiterated that India must immediately end the continuing lockdown, communications blockade and media blackout in IOK, and release the incarcerated Kashmiri leadership and innocent Kashmiri youth, many of whom are held at undisclosed locations away from their families.

The participants underscored that the only solution to the Jammu & Kashmir dispute lay in the full implementation of the relevant United Nations Security Council Resolutions.

“The non-implementation of these Resolutions, despite a lapse of more than seven decades, remained a scar on the collective conscience of the international community,” said official statement issued by Foreign Office.

The Kashmiri leadership acknowledged Pakistan’s unwavering support to the Kashmiri people and appreciated its efforts for effectively raising the Kashmir dispute and highlighting gross human rights violations in occupied valley at all international forums.