Study states high taxes have sparke­d smuggl­ing of many produc­ts into the countr­y
By Usman Hanif
Published: February 8, 2020
Tweet Email 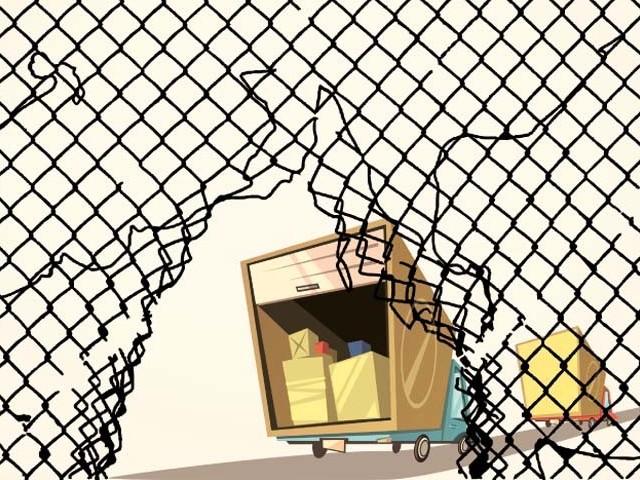 KARACHI: The Pakistan Tehreek-e-Insaf (PTI) government’s policies aimed at curtailing imports have started yielding desired results. The trade deficit has contracted considerably but whether the current path is the right one or will it give rise to smuggling remains to be seen.

According to data compiled by the Pakistan Bureau of Statistics, imports into the country decreased 16% to $27.2 billion in first seven months (Jul-Jan) of the current fiscal year 2019-20 compared to $32.4 billion in the same period of the previous fiscal year.

In its efforts to contain the import bill, the government hiked customs duty and regulatory duty on imported products to discourage imports and encourage their substitution with locally produced goods.

However, prices of imported products have nearly doubled in the wake of import substitution policies and consumers are facing trouble finding certain products like milk flavouring, chocolate spread and cheese in the market.

According to a study conducted by the research department of the Karachi Chamber of Commerce and Industry (KCCI), high tax rates have triggered smuggling of many goods into the country.

Given the exorbitant taxes coupled with other import duties, which add up to 85.5% in a few cases, smuggling, under-invoicing, misdeclaration of goods and corruption have increased.

Transit trade with neighbouring landlocked Afghanistan has encouraged illegal trade with Pakistan, according to the study.

For instance, 47% of tea coming into the country is smuggled because the government has imposed 11% customs duty and 2% additional customs duty on the commodity.

Total consumption of black tea in Pakistan is 225,000 tons but official imports stand at only 110,000 tons. The gap was filled by the smuggled tea which came through porous borders and by taking benefit of Afghan transit trade, the study said.

It pointed out that there was no consumption of black tea in Afghanistan.

“If we take auto parts and motorcycle spare parts, around 57% of them are smuggled due to 35% customs duty on their imports along with 2% additional customs duty,” said the KCCI research department in the report.

Pakistan produces only 18% of the parts while 16% are imported through legal ways, according to the study.

On the other hand, around 59% of tyres entering the country are smuggled while 18% are produced domestically and 23% are imported legally.

Besides the massive smuggling, over 80% of the imported tyres come from China at zero duty under the China-Pakistan Free Trade Agreement.

On the import of tyres, 16-20% customs duty is collected in addition to 2% regulatory duty and 2% additional customs duty.

Around 11% of plastic raw material and plastic granules are also smuggled into the country while 26% are produced locally.

Similarly, fabric, which is used as a finished product as well as a raw material to manufacture value-added products, is also making its way into the country through grey channels.

Nearly 17% is smuggled while 58% is produced locally and 25% is imported legally.

A substantial quantity of abrasive paper and waterproof silicon carbide abrasive paper is also being smuggled into the country due to high taxes. This commodity is easy to carry and a substantial share has been taken over by smuggling and misdeclaration so a huge amount of revenue is lost.

“Reduction in taxes on these smuggling-prone items will encourage formal trade and enhance revenue for the national exchequer,” remarked KCCI President Agha Shahab Ahmed Khan while talking to The Express Tribune.

Regarding the auto sector, the chamber president requested the government to abolish all duties except for the customs duty, which should be slashed to 11%. “The auto sector employs a huge number of people,” he pointed out.

Khan was of the view that the reduction in customs duty would curb smuggling and turn local manufacturing competitive in the domestic as well as international market.

Moving on to fabric, the KCCI chief said lower taxes on imports would make the fabric available in the domestic market at competitive prices through formal imports and would also help increase employment in the garment sector.

View from the other side

“There is a huge possibility that smuggling may have increased due to the measures aimed at curtailing imports, however, the current policy of the government is necessary,” said Arif Habib Limited Head of Research Samiullah Tariq.

He pointed out that products like Nutella, Ovaltine and cheese were mostly smuggled and customers paid general sales tax and other taxes on them, however, the amount did not enter the national exchequer and was pocketed by illicit businesses.

“Although some of these products are now short in the market, newer brands are available with Urdu description, meaning import substitution is taking place,” Tariq said. “This will encourage businessmen as they will not have to compete with the smuggled products now.”

He highlighted that prices of packaged food products had doubled following implementation of the government’s measures, which provided a wide space to the local manufacturers to produce their own products.

Talking about mobile phone imports, Tariq said they had risen despite the imposition of high duties to curb smuggling.

“Now a mobile phone, entering the country through whatever means, has to be registered with Pakistan Telecommunication Authority (PTA) and be taxed so cellphone imports through proper channels have increased,” he said.

“Two new tyre manufacturers are entering the country to establish their plants due to the conducive policies,” he said. “It is definitely a good thing in the long run.”

However, he stressed that the government needed to step up efforts to curtail smuggling, under-invoicing and other illicit channels, which would help accomplish its goal of import substitution and enhanced export base.

He termed the condition of computerised national identity card (CNIC) for wholesalers a good step because the wholesale sector was the root of the retail sector and contributed 18% to the national economy but paid only 0.5-0.7% of taxes.

“When people from the wholesale segment buy from factories and sell to retailers, there is a huge profit margin in between on which they do not pay the government its due share,” he said.

“These kinds of steps will help the government in its campaign of input-output outcome adjustment,” he said.

The government needed to initiate strict action on the retail sector, otherwise, smuggling would continue into the country, the analyst said.