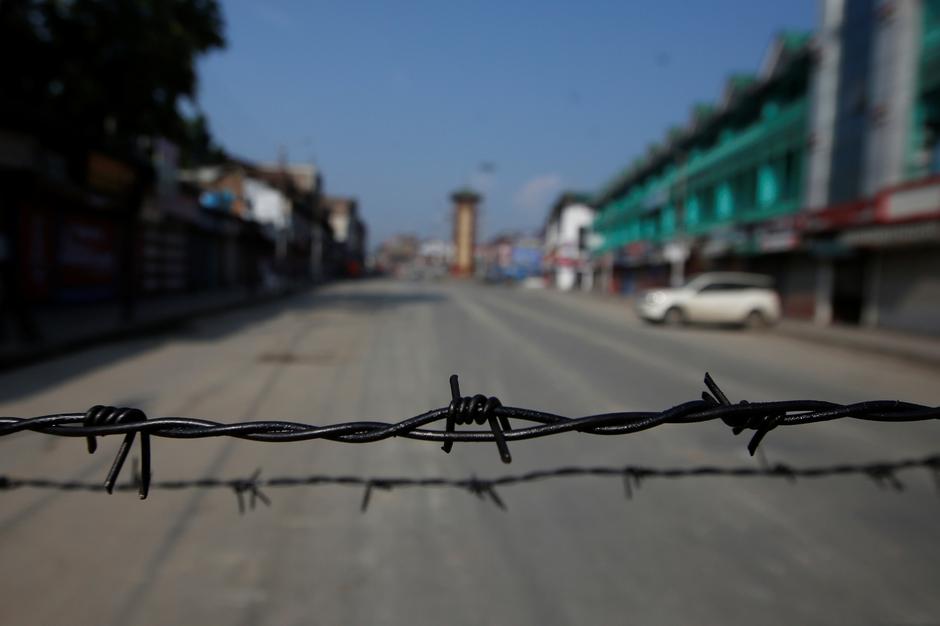 ISLAMABAD: India is trying to ethnically cleanse the disputed Himalayan territory of Jammu and Kashmir for its ultimate objectives.

This was stated by panellists, including the Minister on Kashmir Affairs Ali Amin Gandapur, former Azad Jammu and Kashmir (AJK) prime minister Sardar Mir Ateeq, Kashmiri separatist leader Yasin Malik’s wife Mishal Malik and others in a forum organised by The Daily Express ahead of Kashmir Day.

Criticising the atrocities committed by New Delhi in the disputed valley and the months-long curfew imposed on the people there, Gandapur said that India has set some of the worst examples of cruelties and brutalities in the occupied valley.

They are trying to do ethnically cleanse Muslims in an organised fashion, he said, adding that India wanted to crush Kashmiri people’s right to self-determination using inhumane techniques.

Hailing the resistance of the Kashmiri people to the Indian troops in IOJK, the minister commended the valiant fight put up by the Kashmiri youth. He asserted that the Pakistani government has raised the issue of Kashmir and Indian atrocities there at every forum, particularly on the international stage.

Thanks to Islamabad’s successful foreign policy, Gandapur said that the matter has been twice discussed in the United Nations Security Council (UNSC) in such a brief period.

Further, he said that several international human rights organisations have also expressed their deep concerns over the violation of human rights in IOJK, Gandapur said.

The minister further said that there is a dire need to take practical steps to stop Indian Prime Minister Narendra Modi from enforcing the extremist ideology of the Rashtriya Swayamsevak Sangh (RSS).

The fire of extremism will engulf the entire region, Gandapur warned, adding that if Modi succeeds, there will be a serious threat to regional and international peace.

Gandapur said Pakistan would continue its unconditional support for Kashmiris without considering consequences. He warned the nuclear-tipped but hostile neighbour to think twice before attacking Pakistan as it had already witnessed the results of breaching Pakistan’s airspace this time a year ago.

Regarding Kashmir Solidarity Day, which is observed every year on February 5, the minister expressed that the entire nation will observe this day with the pledge of continuing unconditional support for its Kashmiri brethren until their last breath and drop of blood.

He applauded US President Donald Trump’s offer to mediate on Kashmir at the World Economic Forum (WEC) and declared it a major development.

Ateeq termed the Kashmir issue as the most complex international issue in the world at the moment. He added that it was critical to understand the seriousness of it to be able to reach a peaceful and constructive conclusion on the matter.

He added that the issue cannot be resolved through speeches, rallies or protests, rather, it required persistent efforts.

The former AJK premier added the Indian government is busy playing a new trick every day to prove that its occupation of the valley was legitimate. We should not be content with the issue advancing incrementally at the international level as the issue will remain unresolved due to the rigidness of the incumbent Indian government.

Ateeq further recalled the only time when meaningful progress was made on the issue was during the tenure of former dictator President General (retired) Pervez Musharraf when both countries moved towards a solution to the 70-year-old conflict at a steady pace. However, Ateeq lamented that the suggestions made then were put into the cold store as soon as Musharraf relinquished his seat.

Dilating on reasons for generating greater international attention and momentum on the Kashmir issue, Ateeq noted that it was two-fold. The first was the tremendous sacrifices of the Kashmiri people and the second was Indian Prime Minister Narendra Modi’s ineligibility and series of missteps.

Ateeq further termed the fist consecutive UNSC meetings on the Kashmir issue after 1965 as major progress. China also played a vital role in it, while Russia also stressed for a resolution to the issue overtly for the very first time in history, he added.

The ex-AJK prime minister added that all international forums had anti-India sentiments and empathy for the Kashmiris. He expressed that it was the high-time Islamabad utilise the current global atmosphere in its favour.

Ateeq also hailed the mediation offer on Kashmir by Trump as a “big step”.

“Modi did not attend the WEC meeting as he was running away from international pressure on Kashmir and the Citizen Amendment Act (CAA),” Ateeq contended, adding that the legislative assemblies of the USA, Britain as well as the European Union (EU) have expressed concerns over the situation brewing in India.

She added that the rights of the Kashmiris were usurped through a presidential order six months ago. The Kashmiris were initially under siege by 700,000 troops which have now swelled to over a million troops, Malik commented.

She complained that Kashmiris have been crying for help for the past seven decades but no one has listened to them thus far.