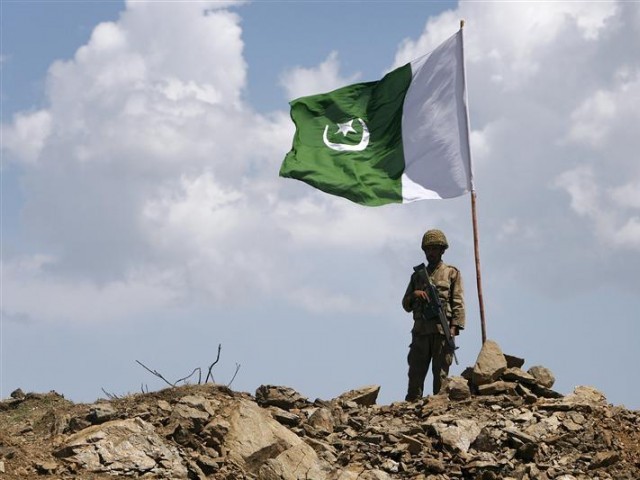 A Pakistani soldier poses for a photo under Pakistan's national flag planted atop the Baine Baba Ziarat mountain in Swat district. PHOTO: REUTERS

It is hard to believe that I, or any other student of Pakistani history, would have reached this conclusion that Pakistan today is the only beacon of political hope in the Muslim world or in the South Asian region. In the article today, I will focus on the developing situation in South Asia. When the British left the Subcontinent 73 years ago, there was an assumption and belief that its constituent parts would adopt participatory liberal democracy as the way of governance. During the century-long rule over this vast expanse of land, the British did not adopt this style of governing in totality. They introduced it in the provinces but did not adopt it at the Centre. In the provinces, elections were held in which the people could choose their representatives who would then form administrations that would perform under the watchful eye of the governor, the chief executive appointed by New Delhi. The governors were always British. The appointees of London governed the capital itself; the viceroy governed as a monarch.

This system of “split government” did not satisfy those who campaigned for what they called “self government”. Leading the fight was the Indian National Congress (INC), a political party that, by most measures, was representative of all segments of the Indian population. The INC was not able to fully satisfy the aspirations of the Subcontinent’s Indian Muslim population. The Muslims fearing that they will not be well treated by the majority Hindus demanded protection of their rights which the INC was not prepared to grant. This caused a split. The Muslim League came up with the demand for an independent Muslim state which would create socio-political space in which the Muslims would survive and flourish. The INC first opposed the idea of Pakistan but then accepted it in the belief that by letting Muslims go it would create a more cohesive nation.

Following Britain’s departure from the Subcontinent, India moved quickly to establish a representative form of government at the federal level, patterned after what the British had launched in the provinces. A Constitution was adopted in 1950 that gave equal rights to all citizens no matter their religion, the language they spoke or the caste they belonged to. The country’s founding fathers — in particular Jawaharlal Nehru who went on to serve as prime minister for seventeen continuous years — recognised that only an all-inclusive system could save the country from splintering. Inclusiveness became the “idea of India”, a term coined by the historian, Sunil Khilnani, who wrote a book that carried that title.

While India quickly found stability, Pakistan, its sister state, went through political chaos that lasted off and on for a quarter century. Enormous demographic upheaval that accompanied independence brought 8 million Muslim refugees from India into Pakistan. This mass movement of people disrupted Pakistan politically, socially and economically. In 1951, when the country took it first population census, 25 per cent of the population was foreign-born. The new comers found it hard to create a political home for themselves. It took 26 years and two failed tries before Pakistan could develop a constitutional arrangement for governance. During this period it became clear that the “idea of Pakistan”– the belief that religion could be the basis of nationhood — had to be discarded. In 1971, Pakistan lost its “eastern wing” that departed to become the independent state of Bangladesh. While the Bengalis were in Pakistan, powerful political establishment in the West tried all kinds of contortions, including the concept of parity that gave equal amount of power to East and West Pakistan to stop the Bengalis from gaining political ground.

Now the Subcontinent finds itself back in the process of defining the basis of politics. India, the leader in bringing inclusive politics to the region, is quickly abandoning the “idea of India” in favour of an approach that favours the Hindu majority at the expense of the Muslim minority. Given the size of the Indian population, even 15 per cent means 200 million people — that is how large the Muslim community is in the country. While the “idea of India” was in play, it attracted a lot of academic and policy attention from people interested in political development. India is being studied again but for a different reason. This time the focus is on how populism combined with authoritarianism can push societies back from inclusive to exclusive political systems.

Among those who have studied the Indian slippage in recent days, weeks and months are the journals The New Yorker and The Economist. The former carried a long article by Dexter Filkins who visited India a few months ago and was able to smuggle himself in disguise into the India-occupied area of Kashmir and reported on how the people of what was once the only Muslim-majority state is now under extreme repression enforced by a large Indian force. In its long brief on India titled “marching to a nastier tune”, The Economist wrote about the turmoil created by the passage by parliament of a new law that granted citizenship rights to new entrants on the basis of religion. Muslims were excluded. “After seven weeks of unrest sparked by the passage of the law, doubts about where the country is heading have grown commonplace,” wrote the magazine. It went on, “Even before independence, the Hindu nationalist (or Hindutva) movement posed an alternative vision. This held that India was for people of Indic faiths — meaning principally Hindus, but also Buddhists, Jains, and Sikhs. After centuries of rule by invading Muslims and then Christians, it was time for ‘authentic’ Indians to reclaim their heritage.” India, in other words, was for those of Hindu and related faiths, certainly not for Muslims.

On August 5, India changed the country’s Constitution by abolishing Article 370 that gave the state a special status. The state was split into two “union territories” to be administered directly from New Delhi. To deal with the expected reaction, the government imposed a ban on the internet, a “shutdown that was the longest ever instituted by a democracy”, wrote The Washington Post. “India has earned the dubious distinction of having the most Internet shutdowns in the world. While the stoppage in Kashmir was the longest, authorities also cut service in other areas to stop the spread of rumours or to quell unrest. Las month, Internet services were suspended temporarily in more than two dozen cities — including the capital, New Delhi — as protests flared over a controversial new citizenship act.”

This brings me back to the title of this essay: that Pakistan is the lone survivor in the South Asian region in keeping the flag of inclusive governance still flying. This is an amazing change in the direction in which these two countries are moving. Pakistan is now the most powerful exponent of inclusiveness while India is busy slipping into the cocoon of Hinduism — the Hindutva.