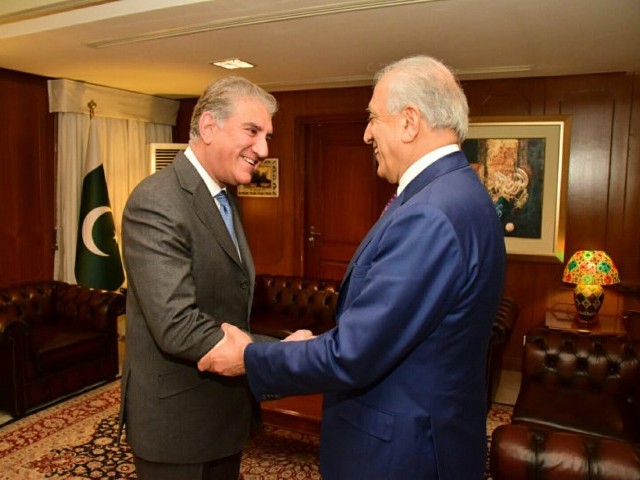 President Trump’s pointman for Afghanistan Zalmay Khalilzad has appreciated Pakistan’s efforts for reduction of violence in the war-torn country and facilitating an imminent peace deal between the Afghan Taliban and Washington.

Khalilzad “welcomed Pakistan’s ongoing efforts to support a reduction in violence that will pave the way for a US-Taliban agreement, intra-Afghan negotiations, and a comprehensive and permanent ceasefire in support of a sustainable peace”, read a statement released by US embassy in Pakistan on Saturday.

The statement was issued a day after Khalilzad held crucial meetings in Islamabad with senior civil and military authorities in order to fine tune the contours of the Afghan peace deal likely to be signed between the US and the Afghan Taliban soon.

Zalmay Khalilzad, the US special envoy on Afghan reconciliation, flew from Doha on an unscheduled visit to Islamabad on Friday.

He first held talks with Foreign Minister Shah Mahmood Qureshi at the Foreign Office and later met Chief of the Army Staff General Qamar Javed Bajwa at the GHQ in Rawalpindi.

The US and Taliban had been negotiating the deal for a year and were on the brink of an announcement in September 2019 when President Trump abruptly declared the process “dead”, citing Taliban violence.

After concluding his visit to Islamabad, the US special envoy on Saturday reached Kabul, where he is set to meet Afghan President Ashraf Ghani to discuss the peace deal.

Pakistani origin man to get £180,000 from British paper over false links to paedophile ring