The Home depart­ment had conduc­ted a raid at the facili­ty for hostin­g vulgar perfor­mances­
By Adnan Lodhi
Published: February 1, 2020
Tweet Email 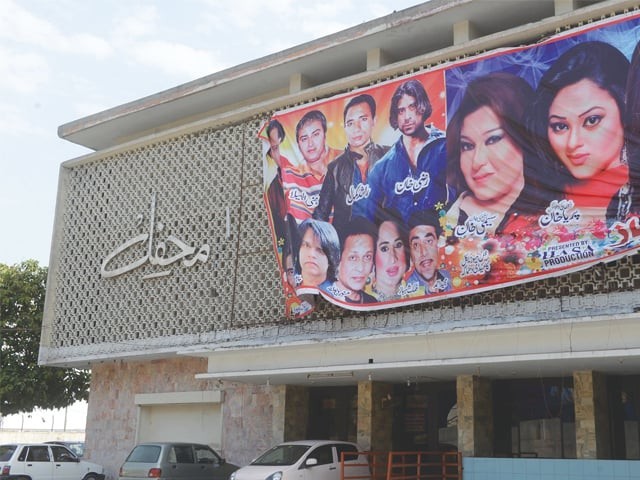 LAHORE .: Authorities in Punjab have initiated a crackdown against ‘vulgarity’ in Lahore’s commercial theatres. Earlier this week, the Mahfil theatre in Lahore was sealed by the district government over hosting unethical dances.

According to details, the Punjab government is taking major steps to curb vulgarity in Lahore’s stage show circuit. Mahfil theatre which was closed on Thursday night is one of the city’s most prominent commercial theatres. The raid at Mahfil was led by assistant commissioner Mahdi Maroof . At the time of the incident, the dance performance of popular stage show actor Nida Choudhary was taking place.

A zero tolerance policy in regard to stage plays with vulgar content is said to be put in place. Additionally the Home department is also penalizing those facilities that are carrying out shows with renewing their license.

“The Home department has been monitoring Mahfil Theater since a while. During the theatre play Dil Mara, dances of vulgar nature were performed. As such we sealed the facility. We are also starting a crackdown against all theatres that are carrying out activities under expired license.  In the coming days, such rules will be strictly enforced,” said an official of the Punjab Home endearment.

Furthermore the authorities have also taken action against the use of Police uniform in a vulgar context during theatre plays.

This is not the first time the government has moved against commercial theatres over vulgar content. Previously many female theatre performers including Nargis, Nida Choudhary, Raima Khan, Aafreen, Feroza and others were warned by the government over provocative dances. Punjab information Minister Fayaaz ul Hasan Chouhan had earlier on advised theater administrations to remove explicit pictures from billboards outside the halls.

Last year the provincial government had advised the culture department and censor board to keep a strict check on the content and production of the performances.

Talking to The Express Tribune, Deputy Commissioner Lahore Saleha Saeed had said, “District Administration Lahore will not allow the theater industry to spread vulgarity through inappropriate dances and dialogues in stage dramas. We will do our best to eliminate this practice and take all measures to provide healthy entertainment to the audiences.”

It’s not just the government bodies that have voiced concerns over the spread of vulgar content. Certain stage show producers also believe that vulgarity has had an adverse effect on their business.

“Theatre is one of the main sources of entertainment in Lahore. People in large numbers used to come and enjoy plays in the city. I remember the days when families also came to  enjoy stage plays. However due to the increase in vulgarity in our scripts, we have lost families as our audience.  It was our demand to start an action against vulgarity. We appreciate the Punjab government’s decision to seal the Mahfil theater. Same action should be taken against other theatre’s promoting vulgarity,” said stage producer Qaiser Iqbal. He further pointed out that several top theatre artists have left due to the increase in vulgarity. As such he believes that action by authorities against provocative plays is pertinent to the survival of theatre.

Have something to add tot he story? Share in the comments below.

Netflix to release a new ‘Matilda’ film with a twist