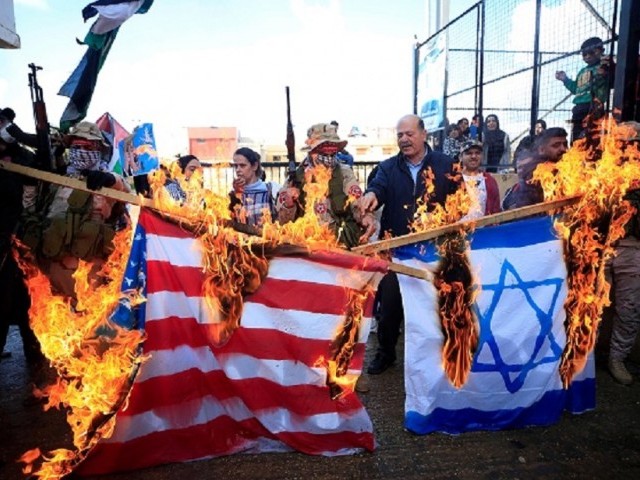 Palestinians have already rejected the initiative, unveiled by Trump along with Israeli PM Netanyahu. PHOTO: REUTERS

Although the Foreign Office did not explicitly say it, the carefully worded statement meant that Pakistan did not endorse the ‘peace plan.’

The Palestinians have already rejected the initiative, unveiled by President Trump along with Israeli Prime Minister Benjamin Netanyahu at the White House.

The plan envisages a Palestinian state and the recognition of Israeli sovereignty over West Bank settlements.

Trump said Jerusalem would remain Israel’s “undivided” capital, but the Palestinian capital would “include areas of East Jerusalem”.

“We have seen the announcement of a Peace Plan for the Middle East by the United States,” said a foreign office statement here.

“Pakistan has consistently supported a two-state solution, as enshrined in the relevant Security Council and General Assembly Resolutions,” it added.

The UN Security Council resolutions do not recognise Israeli illegal settlements in the West Bank and Gaza Strip.

Trump’s peace plan, however, is an attempt to legalise all those Jewish settlements illegally occupied by Israel since 1967 Israeli-Arab war.

“Pakistan continues to support a just and lasting solution to the Palestinian issue, through dialogue and negotiations, that leads to the realisation of the legitimate rights of the Palestinians, including the right to self-determination,” the statement read.

“We renew our call for the establishment of a viable, independent and contiguous State of Palestine, on the basis of internationally-agreed parameters, the pre-1967 borders, and with Al-Quds Al-Sharif as its capital.”

While Trump is facing impeachment that could potentially undermine his chances of re-election later this year, Netanyahu is also embroiled in corruption charges at home.