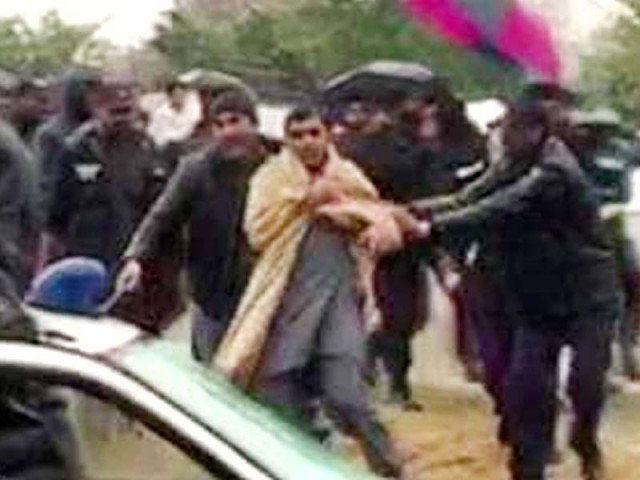 ISLAMABAD: Police arrested and booked over 30 people including MNAs Mohsin Dawar and Ali Wazir for staging a protest outside the National Press Club against the arrest of Pashtun Tahafuz Movement (PTM) leader Manzoor Pashteen.

After being detained for four hours, they were finally transferred to the Kohstan police station, where a case was registered against them.

The police high-ups held a meeting to discuss the matter but the circle and zonal officers refused to speak to the media.

Eventually, DIG Operations Waqaruddin Syed confirmed to The Express Tribune that a case had been registered against the protesters by Kohstan police.

Earlier in the day, a transit bail request for Pashteen, who was arrested and subsequently sent to jail on 14-day remand by a judicial magistrate on Monday, was rejected by a sessions court in Peshawar.

The session judge accepted the police’s request to shift the PTM chief to Dera Ismail Khan, where an FIR has been registered against him.

Police arrested Pashteen from Peshawar’s Shaheen Town in the wee hours of Monday on the basis of an FIR registered against him on Jan 18 in DI Khan on a slew of charges.

Police official Shiraz Khan said Pashteen was wanted by the DI Khan police on charges, including sedition, hate speech, incitement against the state, and criminal conspiracy.

PTM leader and member of Parliament Mohsin Dawar arrested at protest in Islamabad, calling for release of Manzoor Pashteen… footage from @FarhatJRabani pic.twitter.com/4qLgwT9u68

Federal cabinet does a volte-face on Sindh top cop