Balancing relations with China and US

Balancing relations with China and US

Pakist­an’s leader­ship is fully aware of the global power and influe­nce of the US.
By Talat Masood
Published: January 29, 2020
Tweet Email 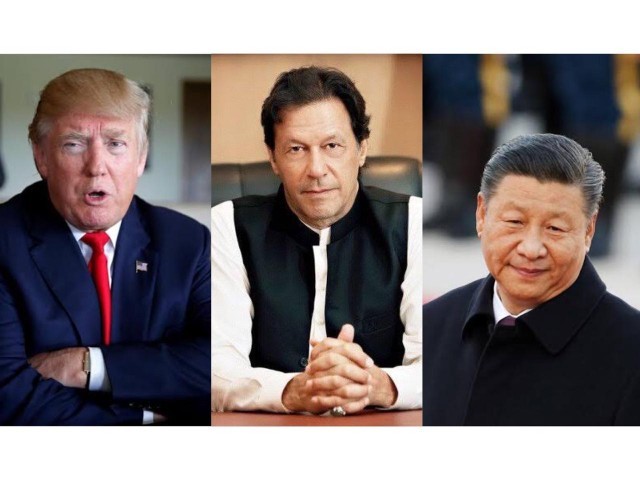 Assistant Deputy Under Secretary Alice Wells on her recent visit to Islamabad alleged that the China-Pakistan Economic Corridor (CPEC) project lacked transparency and will increase Pakistan’s debt burden. It invited a strong rebuff from the Chinese ambassador and a guarded response by our government. This is not the first time that Ms Wells has made these remarks. What is then the motivation and merit in these statements?

Is America worried that the Pakistan-China strategic, political and economic ties are a very effective counter to the US-Indian strategic alignment and cuts against Washington’s interest? Or is it genuinely concerned that CPEC will bleed Pakistan to an extent that it will have a problem paying back the IMF and fulfilling its other international obligations?

What alternative did Ms Wells have in mind as a substitute to CPEC that Washington could offer Pakistan? Do we have to remind her that US military and civil assistance to Pakistan is on hold? The only letup recently has been the partial lifting of the ban on the training of military and civilian personnel in the US.

There could be certain military equipment and technologies that Pakistan may be interested in procuring from the US, financial conditions permitting. One could only surmise that these could be recent versions of F-16 fighter aircraft, upgradation kits for the existing F-16s, helicopters, military vehicles, electronic and optical systems, etc.

The problem is that the US has been clamping sanctions too frequently on Pakistan and this has led it to diversify and rely heavily on China as its primary source of supply of military hard and software.

The benefits of CPEC for Pakistan are expected to be multiple. Its elaborate infrastructure would be highly beneficial for the province of Balochistan and Pakistan as a whole. It would open up news avenues for trade and commerce. Development of the Gwadar port would link it to the Xinjiang province and give a major boost to the economy of Western China.

The apprehension is that it would take time for the port of Gwadar and other major projects to reach their full potential. Meanwhile, Pakistan would be required to start returning the Chinese loan and this would certainly overburden an already fragile economy. It is this situation that Ms Wells is referring too. But the type and quality of relationship that exist between Pakistan and China, and ours being the flagship project, Beijing in all probability would extend the loan period as has happened on a few earlier occasions. The stakes for both China and Pakistan are too high in CPEC and they cannot afford to fail.

The expanse of China-Pakistan relations can be judged from the fact that it was China that was in the forefront of defending Pakistan at the FATF. This is not to minimise the role of Pakistan’s other allies Turkey, Malaysia and Saudi Arabia for a similar support.

In state relations, the quality of engagement matters. The US has been very opposed to Pakistan’s nuclear programme. In sharp contrast with Chinese assistance it has built four nuclear power plants. It has provided conventional weapons and equipment when the US and the Western countries had imposed embargoes and sanctions on the sale of military equipment to Pakistan.

There was a time when Pakistan was the recipient of fairly-current vintage of weapons from the US. But these are different times when several areas of national interests of the two countries do not converge.

So when President Trump showed interest in raising the Kashmir issue, it was music to the Pakistani leadership’s ears. India’s intransigence that it would only deal bilaterally on this subject clearly puts brakes on third-party intervention.

China too has vastly benefited from its relations with Pakistan. In the early period of its relationship when China was facing isolation, Pakistan was a major ally and its window to the world. The development and management of the Gwadar port has benefited China as the port gives it access to the Arabian Sea considerably shortening the existing long route to South East Asia through the Malaca Straits.

The US has wanted that India and Pakistan settle their differences on Kashmir and develop a functional relationship so that India could focus on China. But India remains entangled with Pakistan and that suits China as it keeps India’s security and diplomatic focus at the regional rather than global level. By intensifying the pressure on the LoC and falsely accusing Pakistan of supporting the insurgency in Kashmir, it hopes to bleed Pakistan financially as much as it can. We have to ensure that we guard ourselves from falling in this trap.

Pakistan’s leadership is fully aware of the global power and influence of the US. Despite serious vicissitudes in relations, it has worked toward building bridges even during difficult times. The US ability to harm a country by virtue of its global power is another aspect that is well known.

Relations between the two countries, however, have lately considerably improved. The US acknowledges Pakistan’s support in Afghanistan. General Bajwa has been persistent in his endeavours for the Afghan peace agreement to be finalised. Pakistan is the second most populous Muslim country wielding considerable clout. Moreover, when Pakistan’s economy recovers and there is a modicum of political stability, it has the potential of being a significant market for US goods.

Washington’s adverse relations with Iran and unpredictability of monarchial Muslim regimes plus Pakistan’s strategic location give it an edge that the US cannot ignore.

Interestingly, President Donald Trump and Prime Minister Imran Khan have clicked at the personal level and this could be a good harbinger for Pakistan-US relations. President Trump’s recent impromptu remarks that Pakistan-US relations have never been as good, even if considered inflated, does reflect a major change.

In many ways it affords a unique opportunity for Pakistan that there is a mutuality of interest with two most powerful nations. We have a Prime Minister who has international recognition, an experienced foreign minister and world-class diplomats and it is time they directed their energies to maximise benefits for the nation.