AJK presid­ent tells studen­ts to reach out to their peers around the world and appris­e them of brutal­ities in IOK
By ​ Our Correspondent
Published: January 28, 2020
Tweet Email 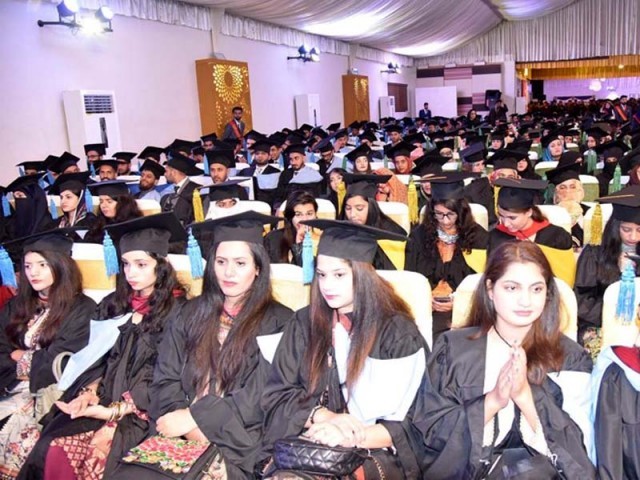 5th convocation of the Mirpur University of Science and Technology is underway. PHOTO COURTESY: TWITTER/@Masood__Khan

MIRPUR: Azad Jammu and Kashmir (AJK) President Sardar Masood Khan has urged students to reach out to their peers around the world and apprise them of India’s brutalities in Occupied Kashmir.

“Our soul, body and identity will remain incomplete until and unless Occupied Kashmir attains freedom and becomes our part,” he said while addressing the 5th convocation of Mirpur University of Science and Technology (MUST) on Tuesday.

Touching on the quest to freedom of previous generations, the AJK president said that it is the responsibility of today’s youth to struggle for the progress and prosperity of the region. “The youth should also fight for the liberation of a vast part of the state which is still under the unlawful occupation of the enemy.”

January 28; Mirpur: Addressing the participants at the 5th Convocation of the Mirpur University of Science and Technology (MUST). pic.twitter.com/QjTeYniyWg

Referring to the situation prevailing in Indian Occupied Jammu and Kashmir (IOJ&K), he once again underscored that Kashmiris are undergoing the worst phase of their history and they are being deprived of their right to self-determination.

President Masood also expressed his immense pleasure that MUST had organised several seminars to highlight the liberation movement and the right to self-determination of the people of IOK.

Felicitating the passed out students and their parents, he said that education does not mean to have knowledge on some specific aspects of life or to attain a degree but the real education is to become a good human being.

While appreciating the university administration for imparting higher education to a large number of students, President Masood said that in order to promote research and innovation, the students should be acquainted with ultramodern technologies to compete other nations in the world.

Greeting the MUST administration for holding a successful job fair and establishing close contacts with the industrial sector, he advised the students to become active members of the society and build their own future.

“Hundreds and thousands of Pakistani youth — who are also the real strength of the country — belong to Azad Kashmir and Gilgit-Baltistan, and they can change the fate of the country while bringing Pakistan and Azad Kashmir in the world’s first rank nations,” Masood emphasised.

More than 84 departments are operation at the MUST at the moment, he added.

Later, the AJK president awarded degrees to 3,367 students, and gold medals to 70 boy and girl students for showing excellence in different disciplines. They included 2,289 under-graduate, 250 MS and MPhil and five doctorate degree holders.