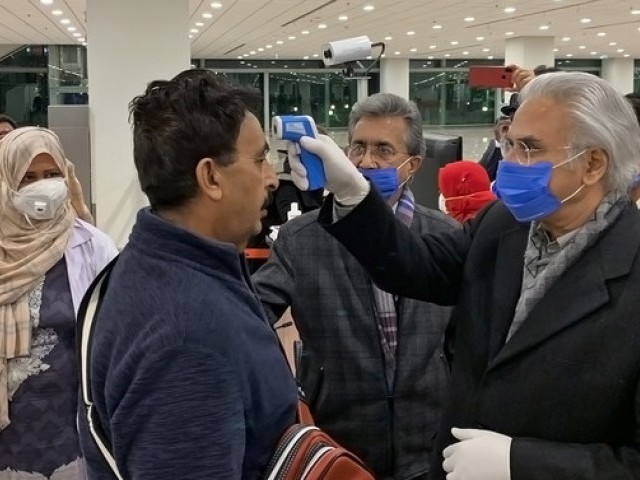 State Minister for Health, Zafar Mirza, inspects passengers at the Islamabad International Airport on January 25, 2020, following an outbreak of the coronavirus in China. PHOTO: Zafar Mirza/Twitter

KARACHI: The government is putting in place necessary safety protocols against the China-origin new strain of coronavirus which has set off global alarms with Pakistani officials fearing if precautionary measures are not adopted on time, then the spread of the mysterious illness in their country could not be ruled out.

So far, there have been more than 2,744 confirmed cases of the novel coronavirus 2019-nCoV – which is believed to have originated in a wet market of Wuhan city, in China’s Hubei province which has since been quarantined by authorities in an effort to stem the spread of the viral outbreak.

Sporadic cases of the viral contagion have also been confirmed in around a dozen countries as distant as France, Australia and the United States.

Chinese health authorities announced on Monday that 2,744 confirmed cases of pneumonia caused by the virus – including 461 in critical condition – had been reported in the country by the end of Sunday.

“Owing to the presence of a large number of Chinese in Pakistan and frequent travels between China and Pakistan, spread of the coronavirus in Pakistan cannot be ruled out, if necessary precautionary measures are not put in place,” says a statement issued by the Prime Minister’s Office on Monday.

With this in view, Prime Minister Imran Khan has directed that a federal-level inter-ministerial meeting be convened at the earliest to “formulate a comprehensive strategy for tackling the threat” of the viral outbreak, according to the statement.

The prime minister’s special assistant on National Health Services, Regulations and Coordination, Dr Zafar Mirza, will preside over the meeting where attendees would include top officials of foreign, interior, aviation, and health ministries, as well as provincial health secretaries, relevant officials of the Pakistan Army, NDMA chairman, and others.

The meeting has been tasked to furnish “firm recommendations within a week” to prevent the possible outbreak of the novel coronavirus in Pakistan.

So far, there has been no confirmed case of the virus among Pakistanis, though media reports claim that some suspected cases have been reported at hospitals in Multan and Lahore.

The National Institutes of Health (NIH) received two samples from Multan’s Nishtar Hospital, which have been sent to a lab in Hong Kong for coronavirus test, according to sources in the health ministry.
No medical lab in Pakistan has the facility to test for the novel coronavirus.

The government has requested China for test kits which, according to officials, are expected to be shipped within a few days.

Of the two suspected patients in Multan, one is said to be a Pakistani national. NIH chief Major General Dr Aamer Ikram said on Saturday that a Chinese national had been admitted to the Nishtar Hospital, where he was shifted to the Isolation Ward after he complained of flu, cough and fever – the most common symptoms of the mysterious illness.

Test reports are expected to arrive within the next 24 to 48 hours. The patients will receive necessary treatment based on the results of test reports. According to sources, the Chinese national, hospitalised in Multan, had travelled to Karachi from China via Dubai on January 21. After landing in Karachi, he took a flight to Multan.

Three Chinese nationals were also admitted to Lahore’s Services Hospital and shifted to the Isolation Ward on Saturday. According to hospital sources, the suspected patients are residents of Wuhan city, the epicenter of the novel coronavirus outbreak, and had recently arrived in Lahore.

China has expanded drastic travel restrictions to contain the viral contagion that has killed 56 people and infected nearly 2,800, as the United States and France prepared to evacuate their citizens from the quarantined city of Wuhan.

China has locked down the Hubei province in an unprecedented operation affecting tens of millions of people to slow the spread of the respiratory illness that President Xi Jinping said poses a “grave” threat.

Meanwhile, China extended the Spring Festival holiday and postponed school openings on Monday, while transport restrictions have been adopted in various areas to further contain the coronavirus epidemic. The seven-day Spring Festival vacation, scheduled to end on January 30, was extended to February 2.

Universities, primary and middle schools and kindergartens across the country will postpone the opening of the spring semester until further notice, according to the General Office of the State Council.
Besides the temporary closures of tourist sites, museums and cancellations of gatherings, transport restrictions have been imposed in various areas as the country is still in its Spring Festival travel rush period.

‘Close contacts of coronavirus-infected patients to be better watched’