His 13-year-old daught­er is among the deceas­ed
By AFP
Published: January 27, 2020
Tweet Email 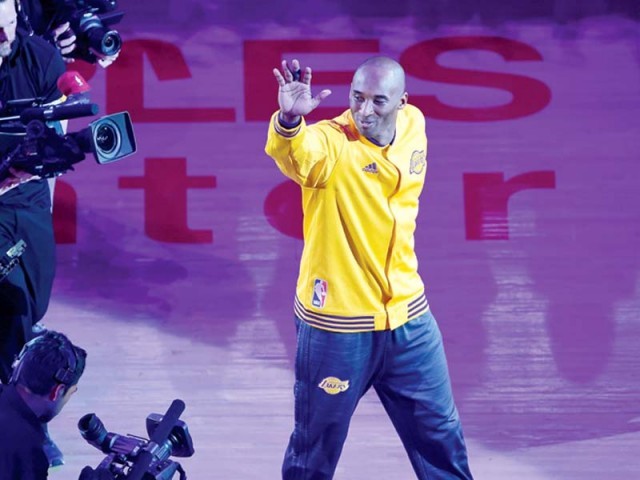 LOS ANGELES: Nine people were killed in the helicopter crash that claimed the life of NBA star Kobe Bryant and his 13-year-old daughter, Los Angeles officials confirmed on Sunday.

Los Angeles County Sheriff Alex Villanueva said eight passengers and the pilot of the aircraft died in the accident.

“There were no survivors… There were nine people on board the aircraft, the pilot plus eight individuals,” Villanueva said.

The helicopter crashed in foggy weather in the Los Angeles suburb of Calabasas. Authorities said firefighters received a call at 9:47 am about the crash, which caused a brush fire on a hillside.

The Los Angeles Police Department air support division grounded its helicopters until the fog lifted in the afternoon due to the weather conditions.

“The weather situation did not meet our minimum standards for flying,” said police spokesperson Josh Rubenstein.

Los Angeles County Fire Chief Daryl Osby said firefighters had to hike to the site with medical equipment and hose lines to extinguish the blaze.

“L.A. is grieving with the Bryant family over the loss of Gianna, who perished with her father and friends in today’s tragedy,” Garcetti wrote on Twitter.

Gianna was one of Bryant’s four children with his wife Vanessa.

The retired NBA star, 41, and Gianna were flying to a game his daughter was expected to play in when their helicopter crashed, according to US reports.

Local media said the other victims included another player and a parent.

Orange Coast College confirmed that its baseball coach, John Altobelli, 56, was also on board the helicopter.

CNN said Altobelli’s wife, Keri, and one of their two daughters, Alyssa, were aboard the chopper as well.

Villaneuva told reporters the authorities would not identify the victims pending notification of family members and identification from the coroner’s office.

“It would be extremely disrespectful to understand your loved one has perished and you learn about it from TMZ,” Villanueva said, referring to the celebrity news website that first broke the news about the crash.

“That is just wholly inappropriate, so we are not going to be going there. We are going to wait until the coroner does their job.”

The National Transportation Safety Board said it was dispatching an 18-person team to California to help with the investigation into the crash.

“Our team will be looking at the history of the pilot and whatever crew was on board,” said Jennifer Homendy, a member of the NTSB.

She added that the helicopter was a Sikorsky S-76B that has a black box which investigators will seek to recover.

According to data from flightradar24.com, a flight tracking site, the chopper took off from John Wayne Airport in Santa Ana at 9:06 am.

It headed northwest, reportedly to Mamba Sports Academy in Newbury Park, about 85 miles (137 kilometres) away.