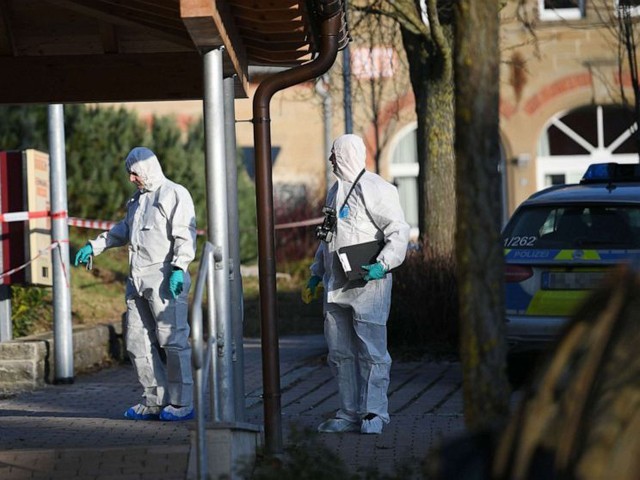 German police searches a house on Jan. 24, 2020 in the town of Rot am See in southwestern Germany. PHOTO: AFP

FRANKFURT AM MAIN: Six people were killed and two seriously wounded in a shooting in southwestern Germany, police said on Friday.

The shooter, believed to have a personal motive, launched an assault in the town of Rot am See.

Police in nearby Aalen told AFP a man with a personal connection to the victims had been arrested and there was no indication that other gunmen were involved.

The police told local TV that the suspect was a German.

After the shooting at around 12:45 (1145 GMT), police arrived on the scene to find the dead and wounded in and around a local hotel.

The Bild newspaper reported that the people killed were family members of the shooter, adding that the perpetrator was a man born in 1983.

Police were unable to confirm details of the relationships or the identity of the shooter.

The shooting took place near the train station at Rot am See, a town of 5,200 residents near Heidelberg.

Aalen police urged people to “refrain from speculation” about the shootings in a message on Twitter.

Police and prosecutors said they would provide more details about the attack in a press conference in Rot am See later on Friday.

While owning firearms is not illegal in Germany, most guns can be acquired only with a licence and they are closely monitored, making mass shootings comparatively rare.

In July 2016, a teenager used a pistol bought illegally online to kill nine people in a Munich shopping centre before turning the weapon on himself.

‘Up to 70% chance of Chinese virus reaching Europe’