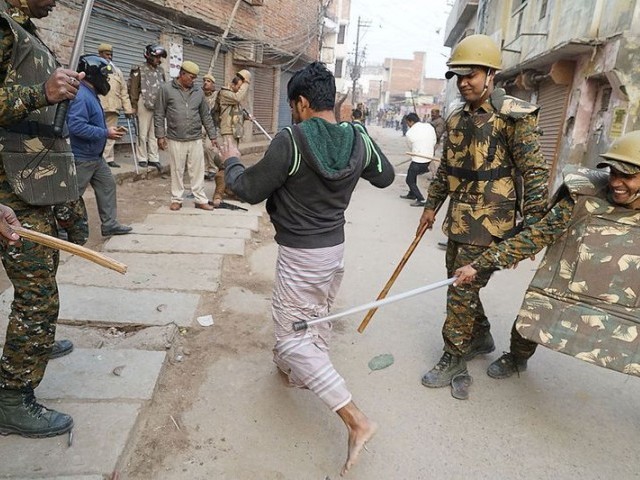 Indian police personnel baton charge a protester during a demonstration against the controversial citizenship law in Varanasi. PHOTO: AFP/File

The Narendra Modi-led Bharatiya Janata Party government in India has “stoked divisions in the world’s biggest democracy,” an article appeared in The Economist read.

The cover of the weekly magazine shows the BJP’s election symbol, a saffron lotus flower, growing out of barb wire.

The article addresses the recently passed controversial citizenship law and the growing intolerance in the country.

India has been witnessing extensive protests against the law, since it was cleared by the country’s Parliament and got presidential approval on December 12. It guarantees citizenship to non-Muslims of three neighbouring countries Pakistan, Afghanistan, and Bangladesh. Critics see the new law as unconstitutional and discriminating against Muslims.

“Last month India changed law to make it easier for adherents of all subcontinent’s religions, except Islam, to acquire citizenship. At the same time BJP wants to compile a register of all India’s 1.3bn citizens, as a means to hunt down illegal immigrants,” says the article.

The article rightly recognises that the law targets the Muslims of India specifically as “many of the country’s 200m Muslims do not have the papers to prove they are Indian, so they risk being made stateless”.

Referring to the law as part of a “decades-long project of incitement”, the Indian publication rightly recognises that the incumbent ruling party has used it as “electoral nectar”.

“What has been electoral nectar for BJP is political poison for India.”

The Indian publication further adds that Modi’s latest initiatives threaten Indian democracy and is “likely to lead to bloodshed”.

Lynchings of Muslims in India have seen a marked increase since the Hindu nationalist party came to power. The recent protests in India and the following crackdown by security forces against mostly Muslim protesters have also fueled the danger of another Muslim massacre on the same lines as Gujarat 2002.

The publication adds that creating division over religion and national identity will likely benefit the ruling BJP and such moves “also distract attention from awkward topics such as the economy, which has struggled since the BJP’S thumping election victory last year”.

“Modi seems to calculate that a sizeable minority of Indian voters are sympathetic to his constant insinuation that Muslims are dangerous fifth-columnists, always scheming to do Hindus down and sell out their country to Pakistan. That is enough to keep him in office,” added the publication.

“This imperils inspiring idea of India as the world’s largest democracy. Modi’s policies blatantly discriminate against his Muslim compatriots. The citizenship row is only the latest in a series of affronts, from BJP’S lionising of vigilantes thought to have killed Muslims to collective punishment of the people of Kashmir valley, who have suffered arbitrary arrests, smothering curfews and an internet blackout for five months.”

The political system is now at risk in India as since Independence in 1947, “India has confounded predictions that its democracy would crumble by accommodating its many constituencies of language, ethnicity, caste and religion”.

The Indian publication further stated that a secular and impartial government, even if flawed in many other ways, protects all these groups.

“The deliberate and sustained persecution of one of them constitutes an implicit threat against all—and so puts the political system at risk.”

It warns that many Hindu nationalists are true believers of the right-wing ideology and are not easily restrained even if Modi is “only cynically exploiting religious bigotry”.

“He may not want to take things too far—he has a country to govern—but they [Hindu nationalists] will have no such compunction.”

“Happily, many Indians have already had enough, as the recent protests show. SC, which this week declined to suspend the citizenship law, should heed this, show some unexpected spine and declare it unconstitutional. And rather than stoke hostility between two of the world’s great religions, Modi should look for other paths to voters’ hearts.”