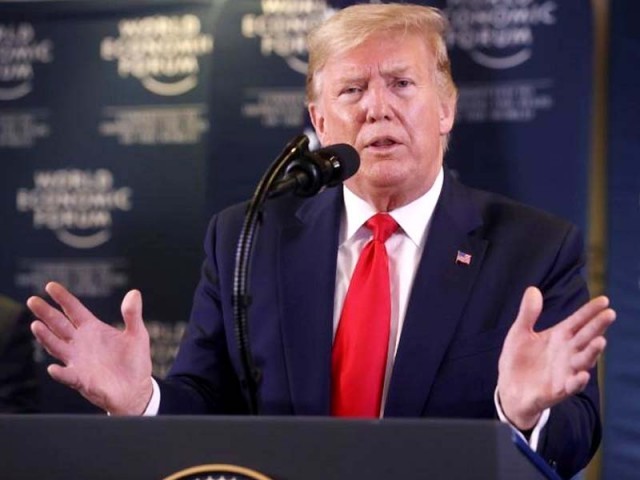 US President Donald Trump gestures as he holds a news conference at the 50th World Economic Forum in Davos, Switzerland, January 22, 2020. PHOTO: REUTERS

DAVOS: US President Donald Trump told Afghan counterpart Ashraf Ghani on Wednesday that he wants to see a “significant” drop in violence by Taliban guerrillas before “meaningful” negotiations can happen.

At the meeting of the two presidents in Davos, Switzerland, “President Trump reiterated the need for a significant and lasting reduction in violence by the Taliban that would facilitate meaningful negotiations on Afghanistan’s future”, the White House said.

Washington has for weeks been calling for the violence to be reined in, posing it as a condition for resuming formal negotiations on an agreement that would see US troops begin to leave Afghanistan in return for security guarantees, after a near two-decade fight.

Insurgent sources told AFP last week that they had offered to initiate a brief ceasefire of seven to 18 days, but there was no announcement of the proposal by either party.

The Taliban are aiming to reach a withdrawal agreement with the US by the end of January and are prepared to “scale down” military operations ahead of signing a deal, their chief spokesman said this week.

The two sides had been negotiating the deal for a year and were on the brink of an announcement in September 2019 when Trump abruptly declared the process “dead”, citing Taliban violence.

Talks were later restarted in December in Qatar, but paused again following an attack near the Usw-run Bagram military base in Afghanistan.

Any agreement with the Taliban is expected to have two pillars — a US withdrawal from Afghanistan and a commitment by the insurgents not to offer sanctuary to militants. It would ultimately have to win final approval from Trump.