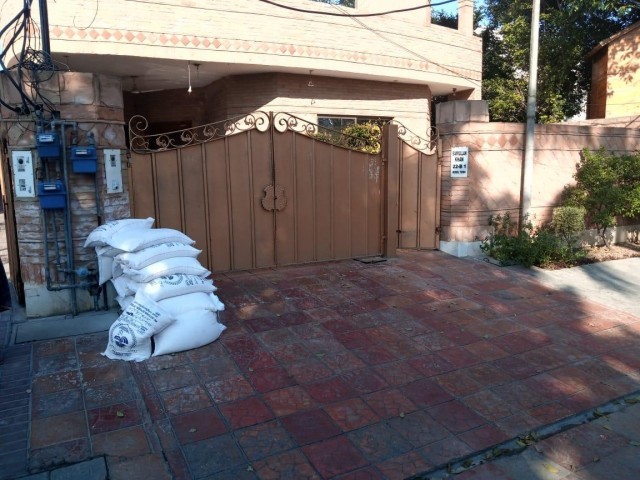 Bags of flour piled up outside the residence of PML-N leader. PHOTO: Express

LAHORE / KARACHI: The Punjab Food Department, which officially manages 75% of the country’s wheat production, dispatched a truck laden with flour bags to the house of an opposition leader in what is seen as a stunt to deflect attention from the ongoing crisis that has resulted in a shortage of wheat and rise in flour prices.

According to Pakistan Muslim League-Nawaz leader Uzma Bukhari, she was informed Wednesday morning that a truck was parked outside her residence with dozens of flour bags.

She said that those accompanying the truck refused to move it from outside her house and claimed that they had been sent by the Punjab Food Department (PFD) to ensure the lawmaker had no trouble in finding flour.

Bukhari said that the incident came a day after her appearance in a talk show in which she had said that flour was unavailable in the upscale Model Town area of Lahore where she resides.

She said that the PFD representatives insisted Bukhari take the flour while refusing to move, and piled up the flour bags at her gate.

Upon this, she said she agreed to take one sack of flour, paying the official rate of Rs799 for the 10kg bag.

But even after that, the truck wasn’t moved, resulting in a spectacle that attracted area residents, who then started buying wheat from the truck.

After ‘gutter politics’, Karachi a battleground for ‘mosquito politics’

The PML-N leader said that she then called up a food controller, who claimed that the truck had been sent for area residents and not her alone. In all, it took an hour to remove the truck from outside her residence.

“It was a drama orchestrated at the behest of the Punjab government,” the irked Bukhari remarked.