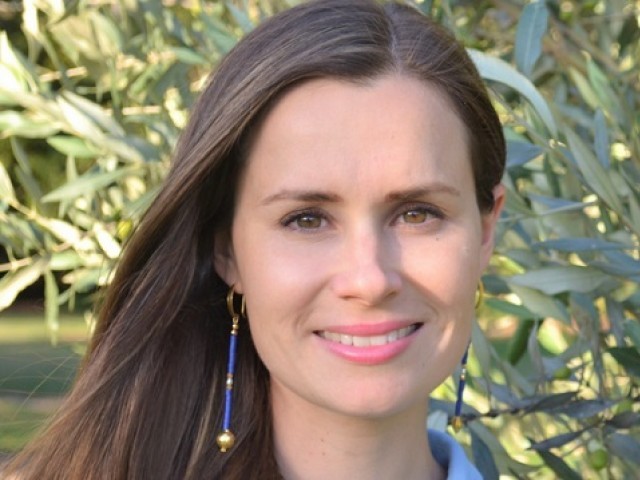 The academic’s arrest was confirmed in September. PHOTO: AFP

LONDON: An Australian-British academic jailed in Iran for espionage rejected Tehran’s offer to work as a spy, according to letters she smuggled out of prison published in British media Tuesday.

Kylie Moore-Gilbert wrote that the first 10 months she spent in an isolated Revolutionary Guard-run wing of Tehran’s Evin prison had “gravely damaged” her mental health, according to extracts in the Guardian and the Times newspapers.

“I am still denied phone calls and visitations, and I am afraid that my mental and emotional state may further deteriorate if I remain in this extremely restrictive detention ward,” she wrote.

She is serving a 10-year sentence for espionage, charges which she rejected, along with offers to become a spy for Iran.

“Please accept this letter as an official and definitive rejection of your offer to me to work with the intelligence branch of the Iranian Revolutionary Guard Corps,” she wrote, according to the Guardian.

“I am not a spy. I have never been a spy and I have no interest to work for a spying organisation in any country.

“When I leave Iran, I want to be a free woman and live a free life, not under the shadow of extortion and threats,” she added.

The academic’s arrest was confirmed in September.

She was accused of “spying for another country” but her family said at the time that she had been detained for months before that.

Moore-Gilbert, a lecturer in Islamic studies at the University of Melbourne, claimed she was shown two different decisions to her appeal — one for a 13-month sentence, another confirming the original sentence of 10 years.

The months in solitary confinement, where the lights remain on for 24 hours a day, had contributed to her being hospitalised, she wrote.

“In the past month I have been to the special care at Baghiatallah Hospital twice and the prison infirmary six times.

“I think I am in the midst of a serious psychological problem.”

US representative on Iran: Tehran’s threats will isolate it more

The Cambridge University educated academic also said her case manager had taken her books “hostage in order to put psychological pressure on me”.

“In addition, in the past three months I have only had one four-minute phone call with my family,” she wrote, according to extracts in the Times.

She is being held in the same prison as British-Iranian mother Nazanin Zaghari-Ratcliffe, who has been at the centre of a high-profile campaign calling for her release.