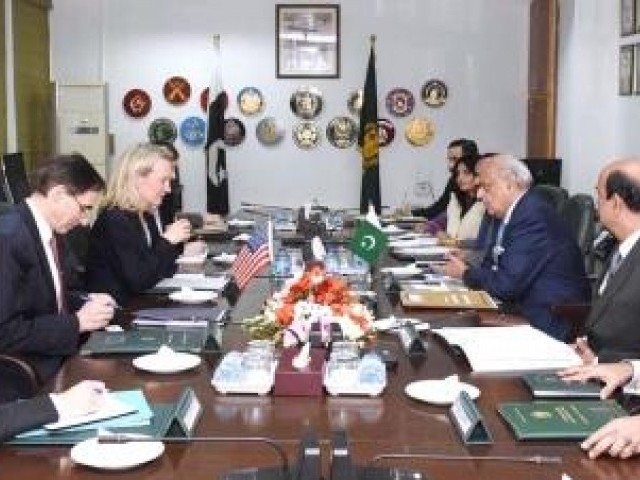 ISLAMABAD.: A key US diplomat on Monday applauded Pakistan’s efforts to implement the Financial Action Task Force’s (FATF) 27-point action plan, as the global body against money laundering and terror financing is set to meet today in Beijing to take up Islamabad’s case.

The comments of Ambassador Alice Wells – US Acting Assistant Secretary of State, Bureau of South and Central Asian Affairs – who is on a four-day visit to Islamabad, came after she was briefed by senior Ministry of Interior officials about Pakistan’s efforts to meet the FATF’s requirements.

Although, there was no official word from the US side about Ambassador Wells’ meeting with Federal Minister for Interior Brig (retd) Ijaz Shah and other officials of the ministry, the interior ministry handout suggested that she was all praise for Pakistan’s progress despite “scarcity of the resources”.

The interior ministry additional secretary said there had been significant progress on both legislative and administrative matters. He said the execution process has also been completed to a greater extent.

The minister for interior said these regulations have proved to be very helpful in our progress.

“The US delegation applauded the progress made by the Government of Pakistan despite the scarcity of resources,” the statement said.

The briefing on FATF compliance was given just a day before the global body’s meeting in Beijing where it would review Pakistan’s progress. The final decision whether to keep Pakistan on the grey list or otherwise would be taken in the next month during the FATF’s plenary session in Paris.

Pakistan was placed on the FATF grey list in June 2018 for it failed to curb terror financing and enact appropriate measures to stop money laundering.

In October last year, the FATF expressed disaffection over Pakistan’s progress and gave Islamabad until February to meet its requirements or face the consequences.

In the meeting with the interior minister, the issue of illegal immigrants was also discussed. Shah said the government has successfully managed to streamline the process to stop such immigrants. “There has been satisfactory progress in this regard,” he added.

The interior ministry’s delegation informed the US diplomat that the solved cases for the months of November, December and January had been delivered to the US correspondents.

The acting US secretary of state said there should be a sustainable method that can work in longer run to ensure smooth functioning of the matters.  The minister welcomed the suggestion and agreed on mutual cooperation in this regard.

In order to facilitate cooperation, the verification process of traveling documents including passports had been streamlined. This has greatly helped in expediting the processes.

Wells appreciated the efforts being put in by Pakistan. While discussing the point pertaining to International Non-Governmental Organization (INGOs), the minister said a proper systematic way had been formulated to register these organizations.

He said those INGOs that fail to fulfill the criteria are given a second chance to explain their stance. However, the ones who meet the set standards are fully facilitated.

Wells will continue her engagements in Islamabad on Tuesday [today] when she will have more meetings including at the foreign office.