A contro­versia­l photo of the Vlogge­r who was accuse­d of sexual harass­ment is doing rounds on social media
By Entertainment Desk
Published: January 20, 2020
Tweet Email 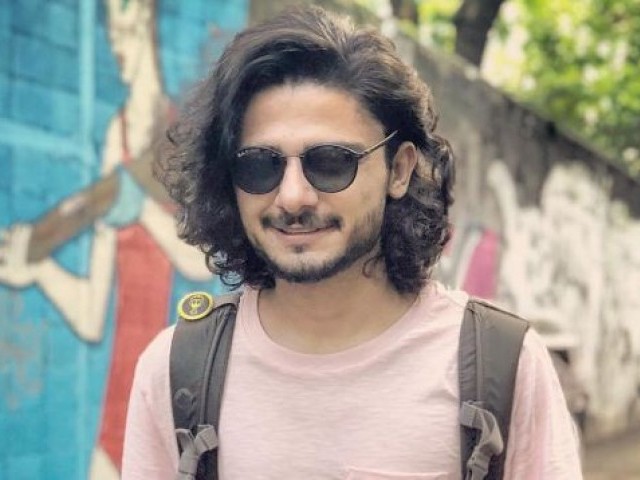 In a recent turn of events, infamous vlogger Umar Khan, popularly known as Ukhano, is back in the spotlight with a few viral pictures -except, this time, they were not leaked. The pictures were from a recent event called, Digital Pakistan, in which he was invited along with several other content creators.

It was the first from a series of interactive sessions to be held with digital publishers and content creators to work on developing a positive image of the country.

Today Prime Minister @ImranKhanPTI had first of the series of interactive sessions he will be doing with the Digital Publishers, Online Content Developers, YouTubers of Pakistan.

He was very candid and explain his vision for Pakistan and also took the feedback very seriously. pic.twitter.com/CzFCi8uTu1

However, from among the pictures taken at the event, the ones showing Ukhano sharing the same frame as Imran Khan have triggered controversy.

The social media personality has been trending on Twitter since Sunday.

Ukhano was accused of sexual harassment and abusive behaviour by multiple women on July 9, 2019. Several screenshots of the 28-year-old’s conversations with other women circulated on social media, wherein Ukhano could be seen sharing his obscene pictures and asking for their ‘bold’ pictures in return.

In addition to the controversy, the recent pictures from the event also show the women who had been vocal critics of Ukhano, sharing the same frame as him.

Great but ppl like ukhano & ducky bhai… We r promoting abusive content creators and shitty ppl. Even when IK says we need to educate sufism & tasawwuf to youth. We don't want more youth to idealize such ppl. :( https://t.co/YeCciBEwI0

Ppl on twitta getting vexed about paki YouTubers smh. Our ministers are so ill informed that they don't even know the atrocities that are being committed under their domain. How can expect them to know what Ukhano did? Lower down your expectations

So glad its being discussed now.
There are only handful of digital content creators in pakistan who are doing the REAL JOB.
Ppl like UKHANO AND DUCKY, what do they have in the name of content creation?
Forget content, ban this harraser Ukhano. #digitalpakistan @ImranKhanPTI

Those who deserve 2 b there were not invited..Unable 2 understand why Rahim pardesi aka Nasreen & Ukhano were there, what's their contribution for Khan's cause & PTI, disappointed 2 see few unworthy ppl besides IK, wondering what was the criteria of invitation for that meeting

While several keyboard warriors continued spewing hatred, one of the most popular vloggers refused to attend. Here’s why:

There are 3 reasons why I said no within 10 minutes of getting the invitation even though it would have been a huge honour.

1. I wanted to spend time with my family at home after being away for almost a month. I was really homesick.

2. I was told that I’ll have to fund my own travel. After having spent almost a month in London and Istanbul my jaib is kind of at the khali end of the spectrum

And there was another reason…

3. I, unfortunately, have said no to many paid opportunities in my career where I was being asked to share the platform with problematic people to say the least. This was not a paid opportunity but I said no for the same reason. (cont)

Even though I wasn’t aware who will be invited and who wouldn’t, bhai ki gut feeling theek thi.

This is not to say that the people present there or the people in-charge of inviting problematic people are wrong. It’s just that I don’t feel comfortable being a part of said events

Also, I am really happy that people from the internet are getting the same opportunities and recognition that are almost confined to traditional media and I would love for this to continue.

Thanks for coming to my ted talk. ✌️

I wanted to clarify why I didn’t attend the prestigious event because some people were assuming that I was snubbed or that I support a certain political party. I don’t. I don’t support any political parties. At all.

And now you know, that was not the reason.

On November 9, 2019, three months after the allegations surfaced, UKhano shared a video on social media to provide his part of the story. He captioned his video, “On 9th July, I was made a target of false allegations. I promised you all that I will go through the legal channel and after submitting my application in FIA along with all the evidence and after 3 months of investigation, I have an FIR against false allegations.”

On 9th July I was a target of false allegation. I promised you all that I will go through the legal channel and after submitting my application in FIA along with all the evidence and after 3 months of investigation I have an FIR against false allegations. #ukhanofalselyaccused pic.twitter.com/NoSfwRzj97

It went onto show the Assistant Director of FIA, Asif Iqbal, claiming that “If someone tries to defame an individual, then an FIR will be filed against the prior, after due investigation.” Lawyer Samaviya Sajjad is also featured in the video, saying that a local website had published the accuser Dua Asif’s elaborate account of abuse, without verifying her claims.

The vlogger also posted a picture of the FIR on November 10, claiming how he was ‘falsely’ accused.

Never make negative comments or spread rumors about anyone. It depreciates their reputation and yours. #UkhanoFalselyAccused #FIR #CYBERCRIME pic.twitter.com/LGjpwVZ2B3