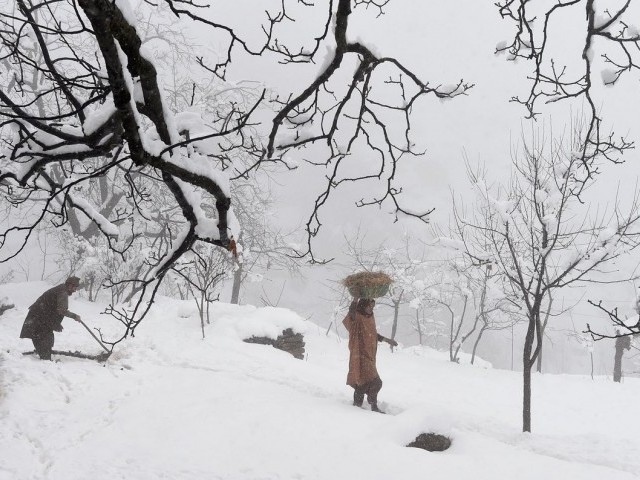 A woman carries a basket on her head during snowfall, Srinagar, Kashmir. PHOTO: REUTERS

ISLAMABAD: Another spell of rain and snowfall is expected at isolated places in northwest Balochistan and Gilgit-Baltistan (G-B) including Azad Jammu and Kashmir (AJK) region, the Pakistan Metrological Department (PMD) issued new alert on Sunday.

The Met Office has predicted mainly cold and dry weather in most parts of the country, while very cold in northern parts and north Balochistan. According to weather department report, fresh wet spell will begin on Monday.

According to details, the alert was issued in a wake of loss of human lives due to disastrous situation in AJK.

Rain and snowfall is expected at scattered places in northeast Balochistan, hilly areas of upper Khyber-Pakhtunkhwa, Kashmir and G-B on Monday, while at isolated places in upper Punjab, plain areas of central and lower K-P and Islamabad.

After the recent snowfall, Gilgit-Baltistan region was hit by a cold snap as mercury dropped to -21 Celsius in Skardu again. Most areas of G-B remained below the freezing point.

The temperature has plunged to -27°C in upper areas of the region, according to the weather report. The snowfall has blocked roads and people of the upper regions suffering from an insane blood curdling cold weather.