Trump trial could be over in two weeks

Trump trial could be over in two weeks 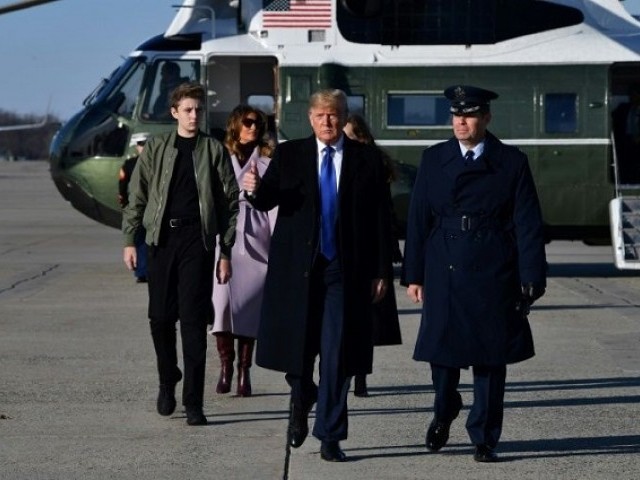 US President Donald Trump could be acquitted by early February 2020. PHOTO: AFP

If the White House and Republicans have their way, President Donald Trump’s trial will be over in two weeks, just in time for him to celebrate his expected acquittal in the February 4 State of the Union Address.

But that depends on Republicans being able to block Democrat demands to subpoena documents and witnesses that could strengthen the case against the president.

During impeachment trial, Trump will be chilling in Swiss resort

Trump’s trial for abuse of power and obstruction of Congress opened with a solemn, ceremonial reading of the charges in the Senate on Thursday, but the rules and schedule have not been set.

That will be decided on Tuesday, with the 100 senators debating voting on procedures: the time is given to opening arguments from the prosecution and defence, and questioning by the senators — the jury in the case.

Democrats are demanding that the Senate agree to subpoena crucial documents and four current and former senior White House officials to testify.

Both are believed to have first-hand knowledge of what Trump is accused of: using his powers illicitly to pressure Ukraine to help his 2020 reelection campaign by investigating his potential Democratic opponent Joe Biden.

The White House blocked the impeachment investigation in the House of Representatives from accessing the witnesses and documents, and shows no sign of giving in now.

McConnell says the issue won’t be decided until after the trial’s initial arguments and questioning take place, and has made clear he doesn’t see the need anyway.

The White House signalled this week what it expects will happen: no witnesses.

“I think it’s extraordinarily unlikely it will be going beyond two weeks,” a White House official told reporters.

He said there is no need to go any longer.

McConnell oversees a 53-47 Republican majority in the body, giving him all the power he needs to set the rules his way and deny the witnesses.

Unless four Republican senators break ranks, at the end of the arguments McConnell can defeat any motion to subpoena witnesses, and then can easily hold a vote to acquit Trump — meeting the White House timeframe.

Democrats are pressing Republicans to support a witness resolution.

“We have asked for four fact witnesses and three specific sets of relevant documents,” Chuck Schumer, the senior Democrat in the Senate, said Thursday.

“So in the coming days, each of us, every one of us, Democrat and Republican, will face a choice about whether to begin this trial in the search of truth or in service of the president’s desire to cover it up.”

Democrats see several Republican senators as possibly willing to stand with them, but none have committed.

One, Maine Senator Susan Collins, came under heavy pressure after a video was widely circulated in the media and social networks showing her in 1999 saying about Clinton’s trial: “I need more evidence. I need witnesses and further evidence to guide me to the right destination, to get to the truth.”

In a statement Thursday, Collins said she hadn’t decided yet.

“I tend to believe having additional information would be helpful. It is likely that I would support a motion to call witnesses at that point in the trial just as I did in 1999.”

No other Republican has gone that far.

If four Republicans do cross over, that could add weeks to the trial — three in the Clinton case.

But McConnell has another card up his sleeve: demanding witnesses that the White House wants, even if they have little bearing on Trump’s guilt or innocence.

Republicans have said they would call Biden’s son Hunter, whose association with a Ukraine energy firm was part of what Trump wanted Kiev to investigate.

They also want to call the whistleblower whose August complaint about Trump’s Ukraine dealings set off the investigation that led to impeachment.

That would provoke a showdown.

Republican Senator Rand Paul told Politico that if Democrats get their witnesses, “my insistence will be not just one witness, but that the president should be able to call any witnesses that he deems necessary to his defence,” Paul said.

“If you vote against Hunter Biden, you’re voting to lose your election, basically. Seriously. That’s what it is,” he said.