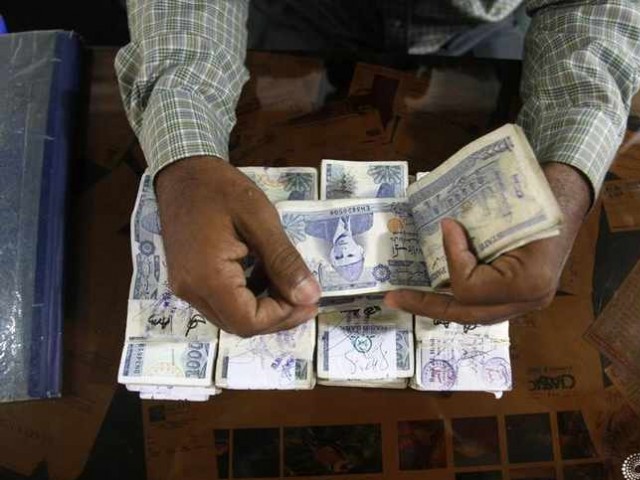 A Reuters file photo of a man counting Pakistani rupee.

KARACHI: The flow of foreign investment has accelerated in the rupee-based government debt securities after authorities simplified the tax regime for non-residents two weeks ago as investment totaled $2.23 billion in first seven months of the current fiscal year.

The latest inflow took foreign investment to over $2 billion, mostly in three-month T-bills, which came much earlier than the expected timeline of June 2020. Earlier, experts had anticipated that foreign inflows would be above $2 billion by the end of current fiscal year 2019-20.

“The significant foreign inflows into debt instruments in the first seven months suggest the investment may surge to around $5 billion before the end of FY20,” BMA Capital Executive Director Saad Hashmi said while talking to The Express Tribune.

A stable-to-positive rupee-dollar exchange rate and an eight-year high benchmark interest rate of 13.25% since July 2019 prompted foreign investors to make a gradual comeback to Pakistan’s debt market after a gap of 25 months (from June 2017 to June 2019), he said.

“The foreign investment accelerated swiftly after the government simplified the tax regime for foreign firms aiming to invest in the rupee-based treasury bills of 3 to 12 months and 3 to 20-year Pakistan Investment Bonds (PIBs),” he said.

According to amendments to the Income Tax Ordinance 2001, capital gains shall be subject to withholding tax at the rate of 10% and shall constitute final discharge of tax liability. There will be no deduction of 0.6% banking transaction tax under Section 236P on transactions in SCRA (Special Convertible Rupee Accounts) and no advance tax payment will be required under Section 147 on capital gains, the central bank said in the first week of January.

The benchmark interest rate is expected to be kept at higher levels in a bid to put the brakes on the accelerating inflation. This will encourage more investors from across the border to pour money into Pakistan’s debt instruments.

“There is an impression in the market that the central bank will cut the benchmark interest rate to step up economic activities March onwards. In any case, however, the rate will be maintained at least at 12% till December 2020 as inflation has continued to accelerate due to latest increase in power, gas, petrol and food prices,” Hashmi said.

On the contrary, the benchmark interest rate in developed countries stands in the range of 2-3%.

“The rupee is also expected to remain stable around current level of Rs155 to the US dollar in FY20,” he said.

“Foreign investors have made a notable profit of 22-23% on such investments so far in Pakistan,” Hashmi said. “The rate of return will remain high around 15% even if the benchmark interest rate is cut and the rupee slightly loses its value going forward.”

Most of the investors have continued to re-invest in three-month T-bills. “Foreign investors have divested a meagre $18.44 million out of the total of $2.25 billion invested since July 2019 to date,” according to the SBP data.

A source added that three global banks including Citibank, Deutsche Bank and Standard Chartered Bank had initially attracted foreign investors from across the globe towards Pakistan’s debt market.

“Market talk suggests a Pakistani bank has also jumped into the fray and has attracted such foreign investment in recent weeks,” he said.

The central bank data suggested that initially the US and the UK were the only countries which made such investments in Pakistan as the global fund managers were mostly operating in the two developed countries.

Now, the fund managers from other countries, including Luxembourg, the UAE, Bahrain, Cayman Islands and Ireland have also started pouring investment into Pakistan, according to the central bank.

Toyota shifts Tacoma pickup assembly from US to Mexico