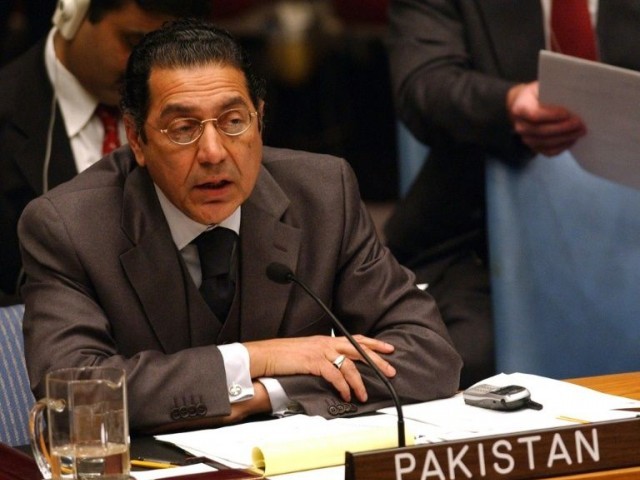 ISLAMABAD: Permanent Representative of Pakistan to the United Nations Ambassador Munir Akram has dismissed Indian claims that New Delhi has successfully scuttled efforts by Beijing and Islamabad to raise the longstanding Kashmir dispute before the United Nations Security Council (UNSC).

In an exclusive interview with the Express News programme The Review, Akram said the UNSC on January 15 not only discussed the Kashmir issue but all members also acknowledged that the human rights situation in the scenic Himalayan region is grave.

Indian Occupied Kashmir (IOK) has been under an interrupted curfew since August 5, 2019 when India unilaterally stripped the disputed territory of its special status by revoking Article 370 of its constitution.

The ambassador said contrary to the Indian propaganda the world has realized the importance of Kashmir issue after a detailed briefing by the UN Military Observer Group in India and Pakistan (UNMOGIP) during the session.

“India always tries to present distorted facts but this time around they were caught,” Akram said.

He said all the facts, including ongoing curfew in the IOK, human rights violation there and closure of internet and other services, were also discussed during the UNSC meeting. “Political situation in India is at a stage where they can’t even afford to allow international or local media to go in Kashmir.”

Akram said Pakistan has continually highlighted the human right situation in the IOK and the Foreign Minister Shah Mehmood Qureshi has written letters to UN officials over situation in Kashmir.

When India continued its oppressive policy, he said, Pakistan requested the UN to convene a second meeting of the UNSC, which was immediately accepted by the UNSC president.

“This was the second UNSC meeting in less than six months to discuss the alarming human rights situation in Indian-occupied Kashmir. China has played a key role in convening the meeting.

“In the meeting, UN Assistant Secretary-General for Political Affairs and the head of the military operations briefed the members on the political and human rights situation in Kashmir and the current situation at the Line of Control (LoC).

“They briefed the council about the measures the Indian government has taken and how tensions have increased. Both the observers have quoted the UN’s reports on human rights violations to highlight the situation in the valley,” he said.

Currently, the observers said, Pakistan is cooperating while India has not cooperated at all. Once they briefed the council, Akram revealed, all 15 members spoke on the issues highlighted and “several members expressed sympathy with us [Pakistan]” after analyzing Pakistan’s position in the matter.

The United States and Germany were of the view that the issue should be solved bilaterally but on the human rights situation, he said, “all the council members admitted that situation is grave in Kashmir. Even those who say that Kashmir is a bilateral issue expressed that current situation is bad and tense.”

Preventive diplomacy takes place when an issue is brought before the Security Council, he said, adding that India is under pressure to take corrective measures and ensure that situation does not deteriorate further. “The international community is not in agreement with Indian threats that they issue every now and then,” he said.

The seasoned diplomat, who has earlier represented Pakistan at the UN, said he himself met thrice with all 15 members before the UNSC meeting and explained the whole situation to them.

To the question that the US and Germany still consider it a bilateral issue, he said, America’s position is because of its strategic partnership with India.

To the question if Pakistan should use its leverage in Afghanistan to get some favour from the US on Kashmir, Akram said the US has not put any hindrance to convening the UNSC meeting even though its official stance is that Kashmir is a bilateral issue.

“We are using the leverage,” he admitted, saying the majority of the Security Council was with Pakistan on Kashmir issue.

For the last 70 years, he said, Pakistan’s stance on the Kashmir issue is the same: implement the UNSC’s resolution of plebiscite for self-determination.

Currently, he said, India has taken unilateral measures by removing Article 370 of the Indian Constitution that needed to be reversed. For its reversal, Pakistan has exerted diplomatic pressure at international forums as well as in UNSC and the UN General Assembly.

“Revoking of Article 370 is fraud and the UNSC has never accepted such measures,” he said, adding that “the UNSC’s position has been that the unilateral measure taken by any of the parties is null and void.”

To the question if Pakistan should support the armed struggle in Kashmir and if such a move was permitted under UN charter, the diplomat said the Kashmiris have the complete right to do so.

“All the UN resolutions and international law recognize that the people under foreign occupation have the right to struggle by all means possible for self-determination. They have this legal right. What Pakistan can do is another matter.”

He said Pakistan will have to first see what kind of resistance Kashmiris pose to the Indian authorities.

Kashmiri people would require world support when the lockdown is lifted, he said, adding that Pakistan is creating the atmosphere for that time.

In addition, if India is willing to reverse its measures, review its policies and if they reverse their repression, then Pakistan should definitely explore the option of negotiations.

“I think the situation at the moment is not positive,” he said.

He said currently, India is not ready to talk and keeping India’s internal and Kashmir situation in mind, Pakistan should keep minimum hopes of formal talks. “Officially, Pakistan’s position is to avoid any conflict and prevent any misadventure such as the one India did last February,” he said.