With a slende­r majori­ty in parlia­ment, the PTI govern­ment critic­ally needs its allies to stay afloat­
By Naveed Hussain
Published: January 18, 2020
Tweet Email 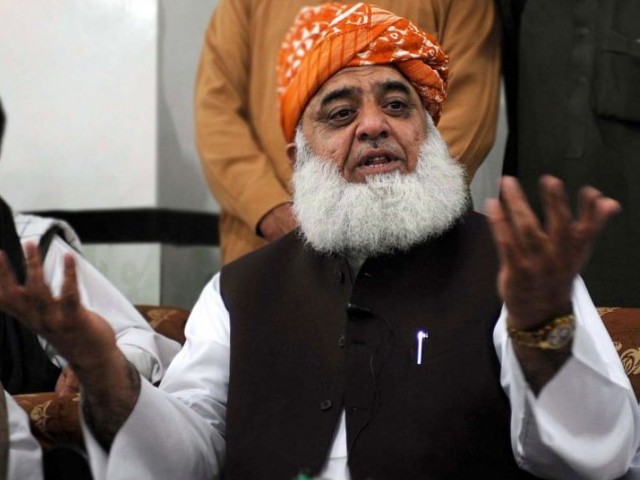 “Beware the ides of March,” a soothsayer warns Julius Caesar, not once but twice, in Shakespeare’s play. Caesar, though superstitious, laughs off the seer calling him a “dreamer”. And pays the price in the end. The spooky prophecy eerily comes true. Caesar’s political ambition is cut short. He’s stabbed to death by a group of conspirators, among them the one who inflicts the “most unkindest cut of all”: Brutus, his closest confidante.

Last year, our rabble-rouser cleric-politician, Maulana Fazlur Rehman, also made a “prophecy”, less sinister though. Unlike Shakespeare’s seer, the Maulana was unambiguous: “We will have a new prime minister in 2020.” The Maulana, who heads his eponymous faction of JUI, was laughed off by the ruling PTI as a “daydreamer”. The cleric led a multitude of his zealots on a 1,500-kilometre trek from Karachi to Islamabad in an anti-government rally he euphemistically called Azadi March. The crowd camped on a ground in the capital to dial up pressure on Prime Minister Imran Khan, the Maulana’s bitter foe, to step aside. Khan won’t. A tense standoff ensued amid a swirl of speculation. Political opportunists joined in. The Maulana won’t settle for anything less than Khan’s resignation. He wasn’t relenting. The pressure was so enormous that Khan’s beleaguered government, at one point, appeared to be caving in. And then, the cleric abruptly backed off. The uneventful end to the high drama left everyone guessing. Was there some deal? Probably, some would say, or else the cleric wouldn’t have left unceremoniously. The threat to Khan’s government fizzled out.

Before the “ides of January” 2020, Khan appeared comfortably saddled. The opposition was — and still is — in disarray. Even fragmented. Or perhaps, they have got what, many would say, they were agitating for: A “Medical NRO” for their jailed top leaders. Nawaz Sharif is out of jail, and in London receiving treatment for his mystery illness. So is “ailing” Asif Ali Zardari recuperating at a Karachi hospital. Tellingly, the opposition has toned down its angry rhetoric. Not only that, they’ve also surprisingly backed the government in parliament to clear some legislative backlog — including some contentious laws. The radical shift is too obvious to hide for either side. And they knew that. Clarifications, justifications came forth, but who can gag the “rumormongers”? Customary verbal dueling aside, the opposition appears unlikely to rock the boat — at least for now.

The year 2020 dawned. And the Maulana’s ominous words rang out in my head. Just as the opposition’s pressure started easing, a new challenge popped up for Khan’s government. The MQM-P, a government ally, publicly articulated its smouldering grievances. It didn’t stop here. One of the party’s two ministers in the federal cabinet, Khalid Maqbool Siddiqui, stepped down to make the government believe they are serious. Other coalition partners took the cue. The Grand Democratic Alliance was the next to go public with its “disillusionment”, followed by the PML-Q, BNP-Mengal — and even the Balochistan Awami Party. They all are pissed that Khan’s PTI has reneged on promises. A proverbial can of worms has opened. Government negotiators rush to placate one estranged ally only to find another drifting away. With a slender majority in parliament, the PTI government critically needs its allies to stay afloat.

Cracks in the governing coalition have been laid bare. The government is trying to downplay the allies’ “disillusionment”, though. At least apparently, the allies have more or less similar grievances: lack of funds to carry out development works in their respective constituencies — something they will be selling to their voters in next election. And they know they can push the government to its limits to get what they are asking for. But is it possible for the government beset by unending economic woes to assuage these grievances? If not, then? I don’t want to sound like a doomsayer, but allegiances can change overnight in our politics because politicians call it “pragmatism”. The PPP chairperson has already thrown a lucrative offer the MQM-P’s way.

And then there’s the ominous prediction of the Maulana, who has unrivaled skills in the art of “pragmatic politics”. Prime Minister Khan should remember it’s 2020. The ides of January might have just given him the taste of what coming “ides”, “nones” and “kalends” hold in store for him. The two main opposition parties might have been subdued — for now, but Khan should also know that “the most unkindest cut of all” comes from where it’s least expected. And then everyone wants a share in the spoils.