Jeff Bezos was made to recite the main taglin­e from film ,'Don'
By Entertainment Desk
Published: January 17, 2020
Tweet Email 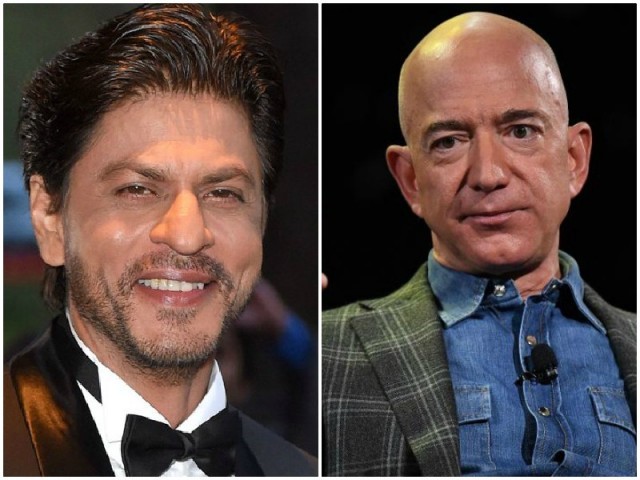 Amazon CEO,  Jeff Bezos during his three day trip to India, got a lesson in Bollywood by none other than the king himself, Shah Rukh Khan.  A video shared by actor Riteish Deshmukh is doing rounds on social media, which shows Khan making Bezos recite the tagline from his film Don, reported India Today.

Khan went on to teach Bezos a tweaked version of the dialogue “Don ko pakadna mushkil hi nahi namumkin hai (To capture Don is not difficult, it is impossible)” with the latter as the subject.

At the welcome event, Khan also shared a cheeky fact about himself. Speaking about online shopping, Khan revealed that he’s still not comfortable buying undergarments on the internet.

“I am going to plug my own brand as I do all my book shopping at Amazon. My groceries come from Big Basket. I have a confession to make… I am still not comfortable in shopping underwear online… It is a boy thing,” he said, as reported IANS.

On his three day trip to India, Bezos plans on planning Amazon’s operations in the country. He also plans on to hold meetings with industry leaders including Reliance chairman Mukesh Ambani and also Prime Minister Narendra Modi.

‘Mindhunter’ season 3 put on an indefinite hold at Netflix