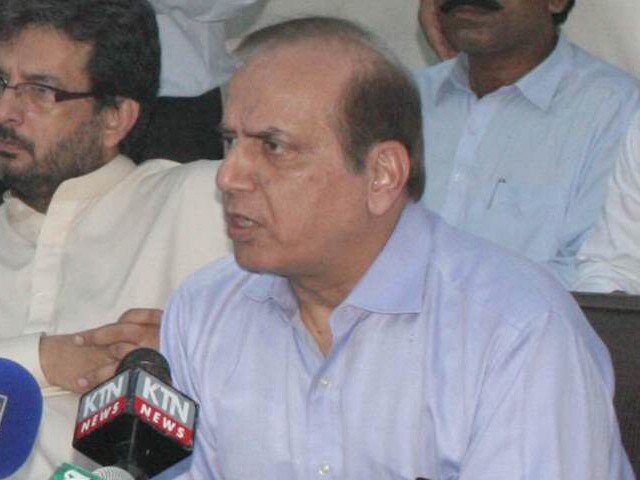 KARACHI: In a secret report, the Shikarpur police chief claimed that one of the most influential members of the Sindh cabinet, energy minister Imtiaz Ahmed Shaikh, was the real patron of crime in the area.

Alleging that the politician and his family were involved in serious crimes, such as robbery, kidnapping, murder and drug dealing, Shikarpur SSP Rizwan Ahmed Khan contended that the minister was also involved in transferring police officials in order to maintain his political position and accommodate his associates, both inside and outside prison.

The twenty-page report was submitted by Khan to the Larkana division DIG, his superior officer, on January 14 (Tuesday). A copy of the report is available with The Express Tribune.

In his report, Khan also shared screenshots of conversations between Imtiaz, his brother Maqbool Shaikh, his son Faraz Ahmed Shaikh and some of the most wanted criminals of Shikarpur.

Adding that Imtiaz consistently put pressure on him to appoint his chosen police officials in certain police stations, Khan asserted that Imtiaz had “insatiable hunger for his control over the police.”

The criminal connections and power of Imtiaz’s personal assistant, Javed Ahmed Shaikh, were also highlighted in the report, which states that he sent police escorts to bring criminals to meet the energy minister.

The SSP’s report further claims that a gunman in the employ of Imtiaz’s son, Faraz, is a notorious criminal, with 30 cases of robbery, murder and rape registered against him. Khan further said that the gunman had martyred Inspector Rao Shafiullah, adding that the minister’s brother, Maqbool, also had private guards who were proclaimed offenders.

The cop said in his report that Maqbool was also of similar temperament as his brother. “Both brothers cannot tolerate seeing any other person come up in the politics of Shikarpur city,” he wrote. “Their political history started from their criminal history sheet.”zz

Disclosing that a number of the minister’s relatives were in the police, with 115 constables in Shikarpur alone, Khan asserted that Imtiaz aimed to appoint members of his tribe as police officers, constables or head clerks at different police stations, so they could spy for him.

He described Chingi Muqam, where Imtiaz resides, as a haven for criminals, writing that it was difficult for the police to carry out raids in the area. “All the criminals build their houses there and live under Imtiaz’s hand,” he stated, pointing out that even Imtiaz’s escort was made up of criminals, who perform their duties in Karachi as well.

Meanwhile, speaking at an urgently arranged press briefing in Karachi, Imtiaz announced that he would take legal action against Khan. He further declared that the allegations made against him and his family in the report were false and baseless.

“The people of Shikarpur know me well and they have elected me thrice,” said the energy minister, claiming that Khan himself was involved in smuggling, kidnapping for ransom and robbery. He added that the SSP had deliberately implicated him and his son in the crimes.

Questioning the authenticity of the report, he said that it had been provided to the opposition and gone viral before reaching Sindh Inspected General of the Police (IGP) Dr Kaleem Imam.

On Wednesday, the Sindh cabinet, in an emergency meeting, had decided to remove Imam from his post as the provincial police chief. A day later, the “secret” report was leaked to opposition leaders and the media.

On December 8, the Sindh government, following a media talk by Khan against politicians including Shaikh, transferred him from Shikarpur. However, the SSP was reinstated on court orders.

The provincial government also issued a notification prohibiting public officials from talking to the media without prior permission from those in charge. Officials disclosed to The Express Tribune that these orders were a result of Khan’s talk with the media in Shikarpur.

“Khan was speaking at a programme held at the Shikarpur press club,” explained Sultan Rind, a local journalist. “He publicly said that politicians were involved in patronising criminals here.”

Another Shikarpur-based journalist said that the SSP had taken a firm stance against criminals. “He is an honest person,” he added, claiming that the cop had presented the true situation of the city. He called for an inquiry into the matter, in order to verify Khan’s allegations.

SHC orders Sindh govt to eradicate locusts within a month