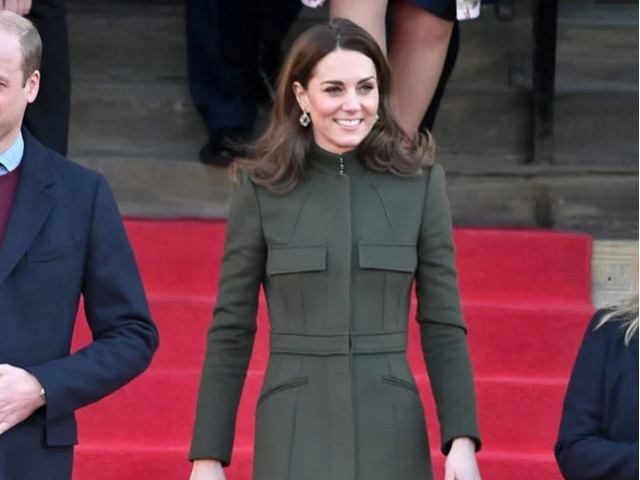 Despite the ongoing hubbub surrounding Meghan Markle and Prince Harry’s bombshell royal exit, the rest of the royal family still has business to attend to.

Kate Middleton and Prince William took a day trip to Bradford with a full itinerary, visiting ‘one of the UK’s most diverse cities’. They intended to visit the City Hall in Centenary Square, stopping over at the Khidmat Centre, checking out a charity session at BetterStart Bradford, and heading over to a Near Neighbours workshop, according to InStyle.

Kate donned a picture of elegance during the whole outing, as she wore a forest green Alexander McQueen coat paired with simple black suede Gianvito Rossi pumps and the Zeen earrings she debuted during her royal tour of Pakistan.

Middleton paired the maxi-length coat with a miniature croc-print handbag that complemented her heels from Aspinal of London.

Today The Duke and Duchess of Cambridge are in Bradford — one of the UK’s most diverse cities — to visit projects which support and promote community cohesion #RoyalVisitBradford pic.twitter.com/fIwSZ7W3QS

However, this was the third time Middleton opted to wear the earings. During her royal visit to Pakistan, the Duchess donned a traditional shalwar kameez, an ombré turquoise dress and pants by Catherine Walker and cream-colored heels with the same earrings.

The Duke and Duchess of Cambridge have arrived in Islamabad! Kate Middleton donned an ombré blue long shirt with matching trousers with details in front.#royalvisitpakistan #katemiddleton #princewilliam #dukeandduchessofcambridge #britishroyalty pic.twitter.com/LoqZaj75Hc

Kate may have remained busy during her royal rounds for the day, but she rocked a polished look the entire time.

Kate and Prince Williams’ outing was first announced on January 8 via the official Kensington Palace Twitter account, where it was confirmed that the Duke and Duchess of Cambridge would be visiting a “number of projects which support the community and promote cohesion within it.”