Kashif Abbasi has been barred from appear­ing on televi­sion - as a guest, analys­t or expert­
By News Desk
Published: January 16, 2020
Tweet Email 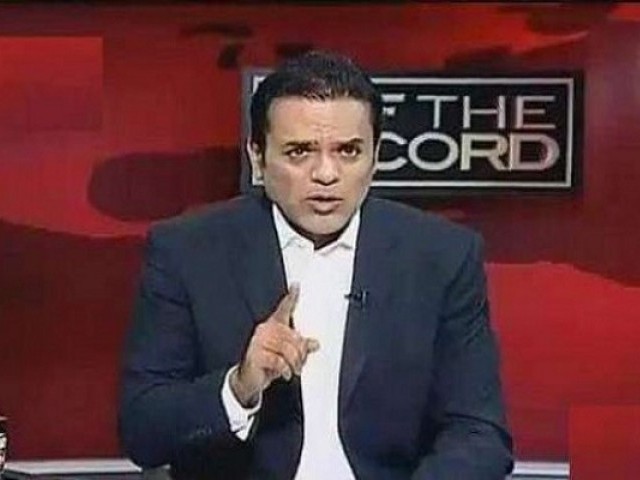 Pakistan Electronic Media Regulatory Authority (Pemra) on Thursday banned the broadcast of ‘Off The Record’ on ARY News for 60 days after Minister for Water Resources Faisal Vawda brandished a military boot on the show.

“PML-N has changed its political narrative … it now seeks ‘respect for boot’ [instead of ‘respect for vote’],” the minister said.

Pemra banned TV host Kashif Abbasi from appearing on television – as a guest, analyst or expert – for 60, calling him “unprofessional” for not intervening to stop the minister.

The notice also stated that non-compliance may result in suspension.

On Tuesday, the minister mocked PML-N leaders for “unconditionally” supporting the recently passed army amendments bills in the Parliament.

“From now on, I will bring this [boot] in every talk show… this shows how democratic the PML-N really is … they now honour the boot by lying and licking [it],” he said.

The PTI leader further claimed that the PML-N stood exposed before the masses as it “ditched” the public after its leaders including former prime minister Nawaz Sharif and party president Shehbaz Sharif “escaped to London in the guise of medical treatment”.