'When people dress up as Adolf Hitler, an invest­igatio­n is always necess­ary'
By AFP
Published: January 14, 2020
Tweet Email 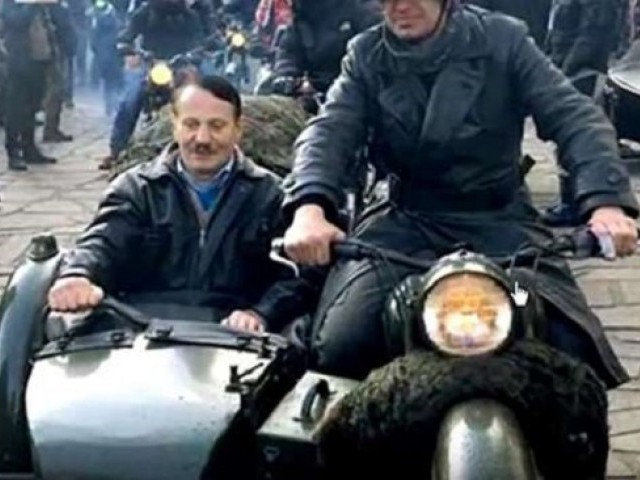 He sported a toothbrush moustache and was seated in the sidecar of a bike driven by a man dressed as a 1940s-era soldier, complete with World War II-style helmet. SCREEN GRAB

BERLIN: German police said on Tuesday they were investigating after a man dressed as Adolf Hitler rode around a weekend festival in a motorbike sidecar, although he provoked more amusement than outrage— including from a local policeman.

“When people dress up as Adolf Hitler, an investigation is always necessary,” a spokesperson for Saxony police had explained to news agency DPA on Monday.

The fake Fuehrer appeared at a classic motorcycle gathering in Augustus burg, near Chemnitz, and was seen in videos of the event posted online.

He sported a toothbrush moustache and was seated in the sidecar of a bike driven by a man dressed as a 1940s-era soldier, complete with World War II-style helmet.

In the video people are heard laughing as the pair pass by and a policeman guarding the event pulls out his phone with a smile to take photos.

Germany withdraws some troops from Iraq as tensions soar

The officer could now face consequences for his failure to step in.
“We would have expected our colleague to put a stop to all this without the least hesitation,” the Saxony police spokesman said.
Saxony premier Michael Kretschmer also condemned the Hitler pantomime.

“Dressing up as a mass murderer is more than just bad taste,” he tweeted. “This kind of behaviour is unacceptable and shouldn’t be repeated.”

The officer seen laughing at the impersonator was summoned for a meeting with his superiors and has “acknowledged his misconduct”, a spokesman for the local Chemnitz police told on Tuesday.

He could still face disciplinary action depending on the outcome of the prosecutor’s investigation into the incident.

The prosecutors are considering whether the Hitler stunt constitutes a possible public order violation, or even an act of incitement to hatred.

Around 1,800 motorcyclists and 7,500 visitors took part in the weekend classic bike festival in Saxony, a region in former communist East Germany that has made headlines for far-right and neo-Nazi activities in recent years.