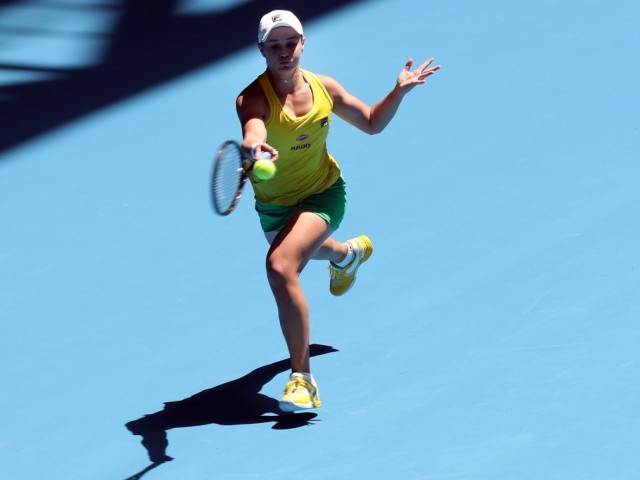 ADELAIDE: World number one Ashleigh Barty survived a scare Tuesday before battling through her opening match at the Adelaide International to beat Anastasia Pavlyuchenkova in three tough sets.

The top seed, who had a bye in the first round at Memorial Drive, faced a struggle to get past her experienced Russian opponent 4-6, 6-3, 7-5 and book a place in the quarter-finals.

“I was able to play my style and control a bit more in the third set,” Australia’s Barty said. “But she hung around and got more aggressive. I was happy to come through and get the chance to play another match here. It was a very close one — but all of ours are. She controlled the match with me trying to do the best I could.”

The 23-year-old lost her opening match last week in Brisbane and is looking for crucial court time before the Australian Open starts next Monday in Melbourne.

She went up a double break of serve up in the deciding third set, but lost the edge as Pavlyuchenkova levelled at 5-all.

But the 31st-ranked Russian, who now stands 3-3 in their head-to-head, lost her own serve on a forehand wide as Barty took a 6-5 lead and closed out the win a game later after two hours, 10 minutes.

The Australian, who won the French Open last year, said she was taking nothing for granted while holding the top WTA ranking.

“It’s been an incredible journey for me and my team,” she said. “It was a whirlwind year, but I’m back competing and doing what I love.”

The American, whose last match was a second-round ouster in Beijing on October 1, exited in 72 minutes, dropping serve four times.

Rodionova worked her way through qualifying rounds, defeating a pair of top 100 opponents to earn her spot in the draw.

“This is my third big win of the week, so I’m not counting anymore,” the winner said. “Hopefully I manage to continue. It’s always great to get such amazing wins against the top players. I feel pretty good about myself right now.”

Elsewhere, Maria Sakkari of Greece made quick work of Vitalia Diatchenko of Russia 7-5, 6-2.

FA seeks government help to stamp out racism in football