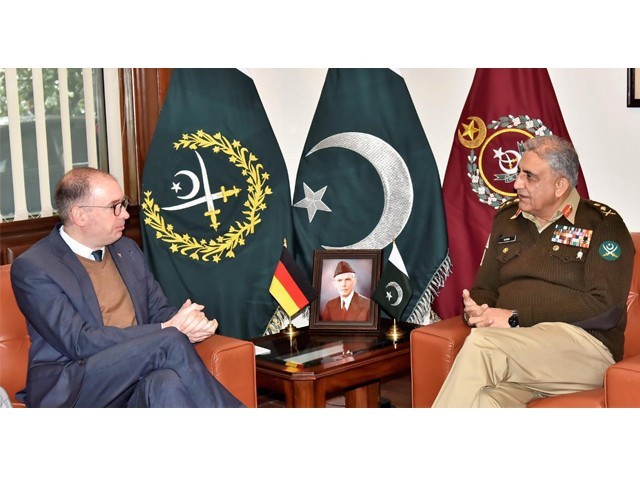 “Niels Annen, minister of state of the Federal Foreign Office Germany, called on General Qamar Javed Bajw at [the] GHQ, today,” the Inter-Services Public Relations (ISPR) said in a statement.

During the meeting, issues of mutual interest, regional security and measures to enhance bilateral cooperation in various fields were discussed.

“[The] visiting dignitary appreciated Pakistan’s role for ensuring peace and stability in the region,” according to the communique.

Earlier in the day, the German lawmaker, who is on a two-day visit to the country also met Parliamentary Secretary Andleeb Abbas at the Foreign Office in Islamabad.

“The two sides expressed satisfaction at the current trajectory of bilateral relations and reaffirmed their commitment to strengthen cooperation in political, economic, trade, investment and educational sectors,” said the foreign statement.

On the deteriorating regional peace environment, the parliamentary secretary informed the Niels Annen that Pakistan viewed with deep concern the recent developments in the Middle East region.

“Pakistan shared the emerging sense in the region that there should be immediate de-escalation and concerted efforts to prevent conflict,” read the statement.

Andleeb reiterated that Pakistan would not let its territory be used against any other state and would not become a party to regional conflict.

She also urged Germany to play a role to address the grave human rights and humanitarian situation in Indian Occupied Jammu and Kashmir, which has been under a lockdown for over 160 days.