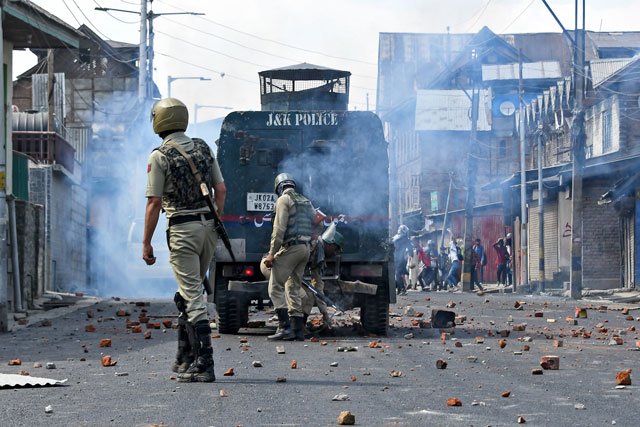 SRINAGAR: A decorated Indian police official was arrested while “transporting terrorists” to the capital New Delhi on Sunday in what Pakistani officials say appears to be a ruined “false flag” terrorist operation – something Islamabad has repeatedly warned the international community about.

According to multiple Indian news outlets, DSP Davinder Singh was caught late Saturday at Wanpoh in Kulgam district in the company of two “terrorists” from Hizbul Mujahideen, an indigenous armed group fighting India’s rule in Occupied Jammu and Kashmir. They were arrested while travelling in a vehicle on Srinagar-Jammu Highway en route to New Delhi.

Police sources identified one of the three HuM “terrorists” as Naveed Babu who, according to them, was involved in the killing of 11 truckers and labourers in a series of attacks in South Kashmir late last year. He is also accused of killing several police officers with 18 FIRs registered against him.

Babu, a former Special Police Official, is the deputy commander of HuM, according to police. He had stolen four assault rifles and deserted the police force to join the group in 2017. DSP Singh had worked for the police for decades and was a member of an elite counter-insurgency force in the IOJ&K. He was awarded the President’s Police Medal for Gallantry on August 15, 2019.

US expresses concerns over Kashmir clampdown after diplomats’ ‘guided’ trip

DSP Singh was apprehended when his vehicle was pulled over at a police checkpoint south of Occupied Srinigar. “The fast moving car was stopped and searched. Two wanted militants and our officer… and a third person were arrested in the operation,” Kashmir police chief Vijay Kumar told reporters. Kumar said police and intelligence agencies were questioning DSP Singh, accusing him of a “heinous crime”.

Security forces recovered guns and ammunition from several locations in the follow-up to the arrests, including from DSP Singh’s residence in Occupied Srinagar. Police sources say investigations are underway to find out why the terrorists were going to New Delhi with the help of the police officer.

DSP Singh had risen steadily through the ranks of the IOJ&K security apparatus during his career. But years earlier he was accused of forcing a man to help Kashmiri militants travel to New Delhi in a deadly attack on the Indian parliament in 2001. India quickly blamed Pakistan-based militant groups for the attack, prompting a months-long military stand-off between the two hostile neighbours.

DSP Singh acknowledged in 2006 he had tortured his accuser, Mohammad Afzal Guru, while he was in custody, but the claims were not taken seriously by investigators. Guru was later convicted for his alleged part in the attack and hanged.

Kumar said the allegations would now be revisited. “We will ask him about the attack in the interrogation,” he added.

Tens of thousands of Indian troops have been deployed in IOJ&K since August 5, when India revoked the disputed region’s semi-autonomous status and clamped a siege and communication blockade in an attempt to preclude street agitation against its unconstitutional move.

The international community, which initially kept quite over Modi’s IOJ&K move, is now waking up to the continuous denial of basic human rights to Kashmiris and the strong-arm tactics of New Delhi to keep the region under control – something Modi has desperately been trying to evade.

Pakistani officials have repeatedly warned the international community about India’s “sinister” plans to stage a “false flag” terrorist operation and pin the blame on Pakistan as it has done multiple times in the past as part of its concerted strategy to malign Pakistan internationally.

In August, Prime Minister Imran Khan warned India could do something sinister to discredit the freedom struggle in IOJ&K. “I want to warn the international community that the Indian leadership will in all probability attempt a false flag operation to divert attention from its massive human rights violations & the unleashing of a reign of terror in IOJK,” he said in a tweet.

And then, as early as last month, the prime minister and Foreign Minister Shah Mehmood Qureshi repeated the warning – this time with a stern message for India to brace for a bitter reprisal for any military misadventure.

After Sunday’s revelations, Maj Gen Asif Ghafoor, the spokesperson for Pakistan’s military, wrote on his personal Twitter handle that it appeared to be a “failed false flag”. “After failed drama of killing and mutilating a Kashmiri near LoC [Line of Control], ill-planned attempt for repeat of Delhi 2001/Mumbai 2008-type false flag [operation] looks failed,” he said.

After failed drama of killing & mutilating a Kashmiri near LOC, ill-planned attempt for repeat of Delhi2001/Mumbai 2008 type false flag looks failed. Hope results of investigations will be made public. Arrested ones will possibly be found listed in a jail. https://t.co/kjOsDl7mMl

Maj Gen Ghafoor hoped that the results of investigations will be made public and the arrested suspects would be found listed in an Indian jail.

(With additional input from NEWS DESK)