Trump in the cockpit

Trump in the cockpit

Ever since his electi­on, Trump’s critic­s have wonder­ed how he would handle a crisis even the ones he create­d
By Shahid Javed Burki
Published: January 13, 2020
Tweet Email 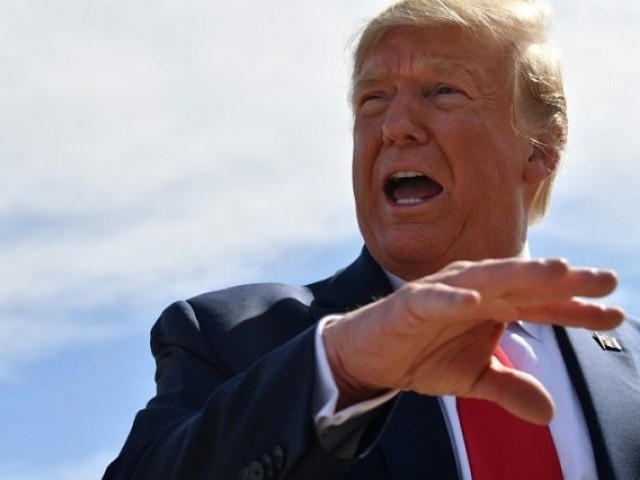 President Donald Trump’s relations with world leaders have been consistent and unwavering but only with those who have authoritarian tendencies. For him, President Vladimir Putin of Russia could not do any harm to the United States’ national interests. He believed the Russian President more than he believed his own intelligence people. He was initially inclined to believe the same about the Chinese President, Xi Jinping, and the North Korean leader, Kim Jong Un. For the same reason he has high regard and respect for the Indian Prime Minister, Narendra Modi, in part because of the anti-Muslim posture of the New Delhi administration. However, Trump did not favour Ayatollah Ali Khamenei, the authoritarian leader of Iran. This exception to his of inclination may have been caused by the fact that the Iranian leader was a Muslim. Trump had not made any secret of his antipathy towards the followers of the Islamic faith. He was prepared to accommodate strong Muslim leaders only when they served his personal economic interests. This was the case with Mohammad bin Salman, the Crown Prince of Saudi Arabia. When an American leader with strengthened powers operates on the basis of what is in his guts, the result may be troubling for the world at large. This may well be the outcome of the adventure in Iran.

“The war-making powers that Congress granted to the president in the years since the September 11 attacks, combined with stunning advances in the technology of man-hunting, have given the inhabitant of the Oval Office the power to track and kill individuals anywhere on earth,” wrote Mark Mazzetti in a news analysis in The New York Times. President Barack Obama used this power to kill Osama bin Laden, the al Qaeda leader, in his compound in Abbottabad, Pakistan. He was not deterred by the fact that the forces sent in to kill bin Laden flew over the territory of a country that was once a close American ally. Donald Trump used the same power to disregard national sovereignty and kill two individuals he had identified as the enemies of the American state. Abu Bakr al Baghdadi, the founder of the Islamic State, was killed by a United States force in Syria while General Qasem Soleimani was the victim of an attack in Baghdad, Iraq. However, there were important differences in the way the two presidents used the power they were given by Congress. Obama used it after careful thought and input by a variety of national security experts in the government. Trump did not seek any serious input from those who had some expertise in matters pertaining to national security. He followed his gut.

Trump is prone to act on whims or on the advice of people who have little expertise in international affairs. His last minute decision not to hit at some targets in Iran after Tehran had downed an American drone came in part after a conversation with Tucker Carlton, a TV host on Fox News, a channel the President watches daily. Carlson reminded the President that a strike on Iran could anger his base that did not want the United States to engage in foreign wars. According to Lindsay P Cohn, a professor of political science at the Naval War College, Trump appeared to have been convinced that General Soleimani’s death will not lead to a significant surge of violence in the Middle East. It satisfied two imperatives for him: appearing to look tough without taking on any new commitments.

The Soleimani decision was taken when both the White House and the Pentagon were bereft of the presence of senior retired military officials. As Peter Bergen in his book, Trump and his Generals pointed out, the President, having appointed a number of generals to important positions in his administration either did not listen to them or began to resent their presence. Reviewing the book, Eliot A Cohen, the Dean of the Johns Hopkins School of Advanced International Studies, noted that Trump’s relationship with “pretty much every general in his orbit failed because he seems to associate soldiering with un-caged brutality. His initial approving description of General Mattis as ‘Mad Dog’ and his disgust at discovering that the Marine is a soft-spoken, well read and judicious combat commander”, were good examples of how he viewed men in uniform.

Ever since he moved into the White House, President Trump’s critics have been worried over how he would handle an international crisis even the one created by his own actions. He is a Commander-in-Chief with enormous powers at his disposal. Known for impulsive actions, would he overreach with dangerous consequences for his country and the country at large? “In the angry and frenzied aftermath of the American drone strike that killed Iran’s top general, with vows of revenge hanging in the air, Mr Trump confronts a decisive moment that will test whether these critics are right or whether they misjudged him,” stated Peter Baker in a news analysis for The New York Times. The first few moves by him and the United States’ adversaries in the Middle East suggest that the American President is on his way to creating chaos. Sitting in the cockpit of a plane flying through extreme turbulence, he doesn’t seem to know how to land it without crashing.

Some of the reactions came in quickly to the Soleimani assassination. Iran declared on January 5, a day after the killing of General Soleimani, that it would no longer observe the restrictions imposed by the nuclear accord it had signed in July 2015. It stopped short of going back completely to the situation that existed before the accord. It held open the possibility that it would return to the provisions in the agreement in the future if Trump reversed course and lifted the sanctions he had imposed. The authorities in Tehran repeated their pledge to take revenge by attacking American assets. Trump responded by threatening a major assault on Iran; saying that 52 sites had been identified for attack including several cultural sites. If the US carried out the attacks, it would have committed war crimes, said Iran’s Foreign Minister Javad Zarif. He predicted that the “end of US malign presence in West Asia had begun”. On the same day, the Iraqi parliament instructed the government to withdraw from the agreement that had allowed the United States to maintain troops in the country.

Iran struck back on January 7, by attacking two airbases in Iraq that were used by the American troops that remained in the country. Anticipating such an action, Trump had promised a sharp and extremely destructive response but was persuaded to de-escalate at the last moment. At a television address on the morning of January 8, he said that he was giving Iran another opportunity to make good on its tremendous potential to develop into a modern and prosperous state. Did he land the plane he was piloting or was it simply a momentary soft landing? Only time will answer this question.