In his first speech on Saturd­ay, the new sultan pledge­d to follow in the footst­eps of his influe­ntial predec­essor
By AFP
Published: January 12, 2020
Tweet Email 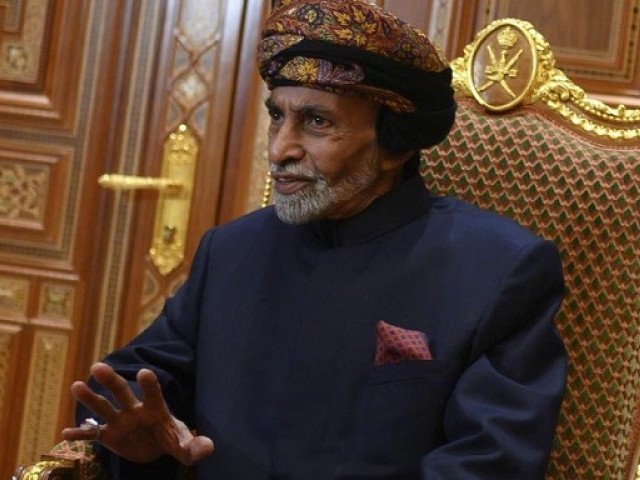 Sultan of Oman Qaboos bin Said al-Said sits during a meeting with the US secretary of state at the Beit Al Baraka Royal Palace in Muscat on January 14, 2019. PHOTO: AFP

DUBAI: The sultanate of Oman, positioned geographically and diplomatically between the rival powers of Iran and Saudi Arabia, earned outsize influence under the long reign of the late Sultan Qaboos.

As the health of the royal ruler declined, and speculation turned to who would succeed him in the absence of an heir, there were questions over the future of Oman and its role as a valued mediator in a troubled region.

However, with the passing on Friday of the 79-year-old sultan and the swift appointment of like-minded cousin Haitham bin Tariq as his successor, observers say Oman appears on track to retain its treasured status as a neutral peacemaker.

To do so though, the new sultan will need to navigate tricky geopolitical terrain as well as address economic challenges facing his own country.

During his half-century reign, Sultan Qaboos thoroughly modernised his country, but also forged a broader role as a go-between in regional and international crises.

In the high-stakes Iran nuclear crisis, Oman played a discreet role in dialogue between Tehran and Washington, leading to the 2015 deal involving Western powers, which three years later was unilaterally abandoned by US President Donald Trump.

In his first speech on Saturday, the new sultan pledged to follow in the footsteps of his influential predecessor.

He expressed support for “our country’s foreign policy of peaceful living among nations and peoples… and not interfering in the internal affairs of others”.

And he said that Oman would continue to “promote peaceful solutions” to regional and global crises.

Sultan Qaboos was unmarried and had no apparent heir, meaning that the succession was decided in a meeting of the royal family who opted to open a sealed letter Qaboos had prepared, detailing his preference.

The speed of the transition is seen as a sign that 65-year-old Haitham has the backing he will need to steer the country and maintain its diplomatic standing.

“The sultanate of Oman will no doubt continue to follow the same policy, from which it has benefited so much,” said Bader al-Saif, an assistant professor at the University of Kuwait and an associate researcher at the Carnegie Middle East Centre.

The royal family’s prompt announcement is a “message to its citizens and neighbours to say that the situation is under control”.

“The best guarantor of Oman’s neutrality will be a successful economic restructuring that draws upon its people and avoids too much reliance on any other power,” said Kristin Diwan of the Arab Gulf States Institute in Washington.

Sultan Qaboos, slight in stature but usually resplendent in sumptuous robes and colourful turbans, was synonymous with Oman’s international profile and many of the tributes since his passing have struck a warm and personal note.

British Prime Minister Boris Johnson, who visited Muscat on Sunday to pay his respects, recalled a meeting with Qaboos where he was “struck by his commitment to peace and understanding between nations and between faiths”.

Iran’s Foreign Minister Mohammad Javad Zarif said on  Saturday in a tweet — notably written in Arabic—that his death was a “loss for the region”.

Along with Zarif and Johnson, a ceremony on Sunday at Muscat’s Alam Palace drew figures from across political divides in the Middle East, including Abu Dhabi’s Crown Prince Sheikh Mohammed bin Zayed and Qatar’s Emir Sheikh Tamim bin Hamad Al-Thani.

But observers say that despite his personal profile, Oman’s diplomatic expertise and its willingness to provide a discreet venue for delicate negotiations, goes well beyond Qaboos.

In a region where the push and pull between Iran and Saudi Arabia is constant, analysts say it is also in Oman’s own interests to signal the transition does not present an opportunity for one of the powers to pull it to its side.

The new sultan has an “interest to present himself as someone who is going to… continue the legacy of a leader, such as Qaboos, who was considered to be successful,” said Sanam Vakil from the London-based Chatham House think tank.

“The message of continuity is very important because Oman faces economic vulnerabilities as well as challenges within the (Gulf) with anxieties about the past few years, where we’ve seen a very assertive Emirati and Saudi foreign policy.”

The new sultan takes power at a time when aggressive foreign policy, which has seen Saudi and its ally the United Arab Emirates (UAE)  embroiled in a grinding five-year conflict in Yemen, is showing signs of dialing back.

Oman refrained from joining the Saudi-led coalition fighting Iran-backed Houthi rebels in Yemen, and leveraged that neutrality to mediate the release of foreign hostages.

It also remained neutral in the damaging blockade against Qatar mounted by Saudi Arabia and allies that saw diplomatic and transport ties cut in June 2017.

“There is a strong rationale for balance and neutrality, rooted in its geography looking towards the Arabian Sea and history of independence from Gulf neighbours,” Diwan said.

“The new leadership will draw strongly upon Sultan Qaboos’ authority as it looks to navigate the difficult regional conflicts and economic challenges.”